I was a new volunteer at the South LA Animal Shelter years ago when Cindy came up to me. She was looking for a black 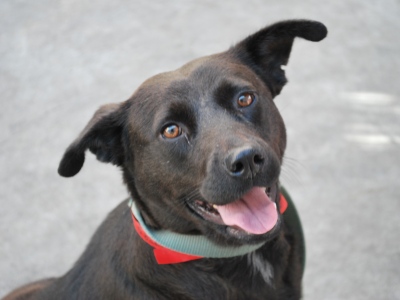 dog because she had heard that black pets had it especially hard at animal shelters. “It’s true,” I told her. “Black pets are more commonly overlooked or feared, so they are sadly adopted out much less.” Hearing her fears confirmed, she was set on adopting a dark canine from the shelter. I was a novice volunteer back then and I remember being so excited to help her find her match. We walked among the kennels as I showed her all the lovely animals we had up for adoption. Amidst the barking and the pleading eyes, I asked her what her lifestyle was like so that I could better help match her up with a furry friend. That’s when Cindy told me about her son Sean and how he was diagnosed with autism when he was three years old. Now seven years old, Cindy wanted to adopt a dog not only for herself but also to bring Sean some extra comfort and companionship.

Many studies show that autistic children with pets often improve in their communication skills. Often the social impairments that kids with autism experience can be reduced by the presence of a pet, and animal-assisted therapies are used widely to help enhance behaviors. Although much research still needs to be carried out and further assessed, it is now commonly accepted that there is a positive impact when families with an individual with autism adopt a pet. And I was determined to help Cindy find her rescued pooch so that she could help her son.

So we met a few pups, all of them joyous to be out of their kennels, licking Cindy, playful and happy. It’s amazing how much a dog can come out of his shell once he is released from his lonely kennel. Once he meets a kind touch. Once he sees the promise of friendship. Sascha came out first. She was a black Shepherd mix who had way too much energy for Sean, Cindy felt. I made a note to reach out to the local Shepherd Rescues and we put Sascha back in her kennel after many belly rubs and treats. Zucko was a little black Chihuahua mix and Cindy worried he’d be too small for Sean. I made yet another note to reach out to my friend Analee who loves to foster Chihuahuas. One of the hardest things about being a shelter volunteer is that once you meet the animals, once you interact and it hits you how incredibly loving and amazing each personality is, it’s tough not to feel compelled to help get them out of the shelter. Conversely, it’s also one of the best parts about being a shelter volunteer. You get to fall in love over and over again, you get to help save lives and watch them walk out the door, into safety, wiggling as they go as if they’re blowing kisses to thank you.

I brought out Angel and almost immediately I knew this would be Cindy and Sean’s dog. A Labrador mix, she was the perfect sized. Five years old, she had that great blend of energy and mellowness. Cindy looked up at me with tears in her eyes and said, “Angel is the one we’ve been waiting for.” She adopted Angel that day, and because she was already spayed, she was able to bring her home.

I’ve kept in touch with Cindy. She sends emails with updates and pictures so that I can share in Angel’s new life, and in Sean’s new progress. Cindy even reported to me recently that since Sean’s diagnosis, she has not been able to sleep without him, not even for a single night. He has always been so afraid of the dark. But now, she was thrilled to let me know that, thanks to Angel who climbs into bed with Sean every evening, she has not only been able to stay up later on her own so that she can read or watch television, she’s even been able to go on a few dates! All because of Angel’s presence, Sean has been calmed, he feels safer, he has opened up, he has found his best friend. And Angel has found the forever family she always deserved.

Stories like this happen every day. Volunteers at shelters and rescue groups across the county making matches, witnessing miracles, sighing in relief that another pet they love found a happy home. You, too, can be a part of these wonderful events by volunteering at your local shelter and by choosing to adopt when it’s time to get your next pet. Because there are so many Angels out there who are ready to love and heal you if you let them.