Best of Cat Health < Bite Like A Rattler, Sting Like A Bee… First-Aid Tips to Help Your Pet 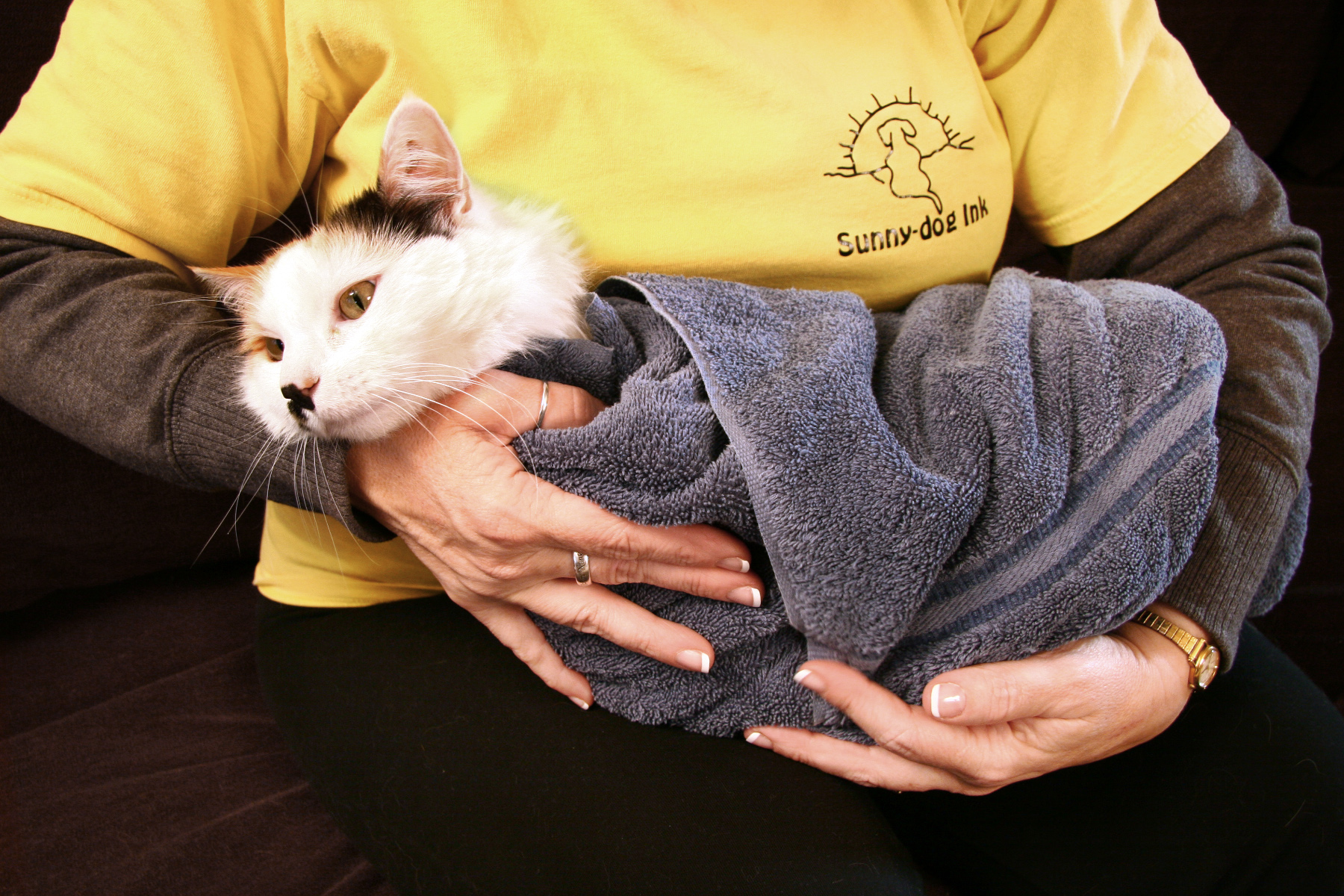 One late summer morning, two Scottish Fold kittens were playfully exploring their fenced yard when Rudy caught Abigail off guard and bounded at her from behind the rose bushes.  As Abby took a tumble landing dazed and confused, a bee buzzed passed her.  The twosome, quickly distracted by this new found fun, attempted to play a game of pounce with the tiny flying creature.  Fun did ensue for a few moments, but it then turned nasty as the bee planted his stinger right onto the tip of Rudy’s nose!  The kitten pawed furiously at his face, and as it began to swell, Rudy started looking more like a bulldog than a fluffy kitty!

Cats and dogs generally paw at and remove an insect’s stinger when bitten, but should you see one through your pet’s fur coat (or on the nose, lip, paw or elsewhere), scrape it away with a credit card, popsicle stick or similar stiff object.   Pulling the stinger with fingers or tweezers could rupture the poison sac allowing the toxin to enter your pet’s body.  Administer 1 mg Benadryl®* per pound of your dog or cat’s body weight (usually comes in 25mg tablets so a smaller half will suffice for most kitties) and apply a cold pack (a bag of frozen peas works well) to any swelling.  Remove it every 3-5 minutes to prevent frost bite. Should severe swelling or any breathing difficulties develop, get to your veterinarian at once.  If anaphylactic shock occurs (a severe allergic reaction), the tongue may swell making rescue breathing difficult, so don’t delay!

Holding pets still for any meds or treatment is not an easy chore, especially if your best friend is a cat, so…first restrain pets by shooing them into a bathroom so that they can’t hide under the bed, and control four paws or claws by swaddling in a towel.  Any animal may bite if she is in pain, so have a properly fitting cat muzzle available because if you are bitten, it becomes a human first aid incident and the four-legged patient won’t get the prompt care she needs.  Well over 50% of cat bites result in their humans needing medical care.

Not good at restraining kitty or find your pooch to be an uncooperative patient?  Doing a weekly head-to-tail check-up can acclimate your canine or feline friend to the human touch.  Start slow but regularly giving your pet the ‘once over’ makes him or her a better patient at the veterinarian and during bath time, but most importantly, it allows you to really check her out and find problems BEFORE they become CATastrophes! Refer to last month’s blog on this topic for details.

*Just be sure the Benedryl® you administer to your pet does NOT contain Acetaminophen or Pseudoephedrine.

Black Widow Spiders terrify us all with their distinctive red hour-glass marking, but rarely are they fatal.  Small dogs and cats generally have bigger issues with the venom due to their size.  Treat bites with ice and Benadryl as you would for a bee sting, and should your pet develop unusual redness, pain, difficulty breathing or paralysis…get to the vet ASAP.

Brown Recluse Spiders tend to hide in dark, secluded areas and their venom is known to destroy tissue surrounding the bite.  Approximately 1/2 inch to 2 inches long, the Brown Recluse can be identified by a distinctive fiddle-shaped mark on its back.  When bitten, most animals do not realize it, but after a while redness occurs.  Clean the wound with hydrogen peroxide, chlorhexidine or povidone iodine. If your best friend appears lethargic, develops a rash, fever, chills, vomiting or diarrhea or if the wound becomes larger or persistent drainage occurs, seek veterinary assistance at once.

Another danger to our pets comes in the form of venomous snakes. Their physical appearance varies, but most can be identified by a broad, triangular head, vertical pupils as opposed to round ones (though hopefully you won’t be close enough to evaluate this), and heat-sensing “pits” between the eyes and nostrils which help them locate prey. “Red touches yellow, dangerous fellow; Red touches black, venom lack,” are a few rhymes that can help but learn which venomous serpents cohabit in your part of the world.

Prevention is the best medicine!  While out walking, your best safety device is keeping control of your dog on a leash.  Stay on open paths, and don’t allow your dog to explore holes or dig under logs or rocks where snakes hide (yeah, right — but doing so can prevent much pain, suffering and even death).  Keep pets away from areas covered in ivy and wood piles where snake food (mice) hides!

Should your pet gets bitten, assume it is a poisonous bite.   Even if it isn’t, non-venomous snakes transmit bacteria (remember…they eat rodents and don’t brush their teeth) making Veterinary care vital.

Do you know where your nearest Animal Emergency Hospital is?  Don’t wait until it is too late to find out.

Baby snakes can be just as dangerous as their full-grown counterparts.  They are born with fangs and venom and generally give all they’ve got with each and every bite!

Snake Bite Vaccine can buy you time, but you’ll still need to get to your Veterinarian quickly if your dog is bitten.  Vaccinated dogs typically develop protection comparable to a couple vials of anti-venin.

Denise Fleck is an award winning author and freelance writer.  After extensive training, practice, more training and more practice, she developed her own Pet First-Aid & CPCR, Senior Pet Care and Pet Disaster Preparedness curriculum and has been teaching animal life-saving skills for 16 years with many success stories to share.  She also created a 5-month Animal Care course for high school students in conjunction with the Burbank Unified School District and Animal Shelter.  She has demonstrated animal life-saving skills on CBS –TV’s “The Doctors,” Animal Planet’s “Pit Boss,” “Kirstie Alley’s Big Life” and other shows and is emBARKing on a 10,000-mile Southern U.S. Pet Safety Tour this Fall.  Visit www.sunnydogink.com to find out if she’ll be stopping in a city near YOU!