Dogs that sniff out cancer 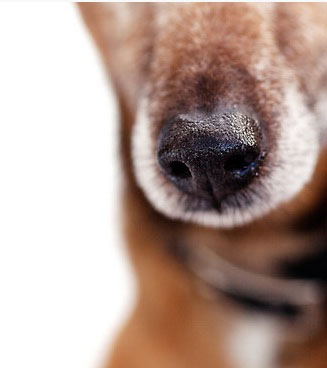 Last month Time Magazine reported that dogs are being trained and can successfully sniff out lung cancer more reliably than traditional tests currently used by most doctors! A dog’s sense of smell is infinitely better than a humans, some sources say 100 times better, while others report up to 1,000 times better, so it’s no surprise they can smell the cancerous cells, but quite amazing that they can be trained to detect them so accurately. Time Magazine reports: “German researchers report in the European Respiratory Journal that dogs can be trained to detect lung cancer by sniffing human breath. The scientists worked with an admittedly small number of canines — just four, including two German shepherds, a Lab and an Australian shepherd — but the dogs had good success. They were able to suss out cancer in 71 out of 100 breath samples from lung cancer patients, and were able to correctly identify 93% of cancer-free samples, giving them an impressively low rate of false positives. That’s better than the imaging tests that most physicians currently use to detect lung cancer.”

Back in 2006, dogs in labs were shown to be able to successfully sniff out both lung and breast cancer, as you can read about in People Magazine too. You can read the full recent Time Magazine article here: http://healthland.time.com/2011/08/18/a-new-way-to-detect-lung-cancer-dogs-can-sniff-it-out/#ixzz1YQco8S00