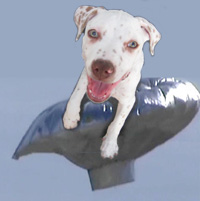 I don’t know about you, but if I hear anything else about Balloon Boy, I’m going to scream (Whew. I resisted the easy “I’m going to pop” pun). All the same, the smart part of my brain sees another side to this. Sure, I find the story annoying and the parents’ actions questionable at best, but at the same time I’m oddly intrigued and even (dare I say?) inspired. I mean, after all, Richard and Mayumi Heene allegedly orchestrated something that had an entire nation riveted, watching at the edge of our seats to see where the story would take us. They had us in the palm of their hands. Even after the incident was exposed as a hoax, they still had us all talking about it.

We in the animal welfare community could stand to take a lesson here. If Balloon Boy & Associates can garner this sort of wall-to-wall news coverage for a made-up story, shouldn’t we be able to drum up even a fraction of that? After all, our entire cause is life-and-death. What could be more dramatic? Unfortunately, because the issues of overpopulation, puppy mills, and shelter animals being put to death have been around for a long, long time, the media and the public seem to have become inured to them, and the coverage has become more and more humdrum. So what do we do? What can we learn from Balloon Boy?

1. People out there DO care… but they want to be entertained.

The world is full of people ready to drop everything they’re doing and park themselves in front of the television to see just what happens when a boy-filled balloon plummets back down to earth. Why? Because they care, sure. But more than that, it’s entertaining. It’s sensational. It’s human drama unfolding before their very eyes.

Think about the animals in your shelter or rescue group. So many of them have dramatic stories, but those stories go untold. Sure, maybe you write about each animal on your web site or on Adopt-a-Pet.com, but why not get them out to people who aren’t looking for a pet to adopt? There’s the dog whose owner died tragically, the one who was found shaved and painted, the one who became best friends with a hamster in his foster home, the cat who leads the blind dog around. Tell their stories in the most emotional, entertaining way you possibly can. We don’t always know the story behind each of the pets in our care, but let’s tell the stories of the ones we do know. Write a press release and get it out to local media (and national, too, if the story is compelling enough). Use Twitter and tweet out a link to the pet’s story on your site or use Adopt-a-Pet.com’s TwitterACritter feature to tweet links to your pets’ stories on Adopt-a-Pet.com.

The same old story can only be told so many times. The Balloon Boy story was nothing if not unusual. A boy accidentally taking off in a balloon his mad-scientist father made? Not a chance that story isn’t going to be picked up by the news… all of the news. Nobody had ever seen anything like it.

We have a little more of a challenge than Balloon Boy’s father had. After all, he was free to be as creative as he wanted to be because he was writing fiction. We are tethered by the bonds of reality, but we do still see unusual stories, don’t we? Open your eyes to the world in which you operate and develop radar for the strange, the beautiful, the coincidental, the inspiring stories that develop there. Understand that your world is more than just the pets currently in your care… extend your radar to include what happens to those pets after you adopt them out. Tell those stories to the media and social networks, and make sure to include a pro- pet-adoption spin and a promotion for your shelter in every story.

3. Tell the story in real time to allow the public to be a part of it.

This one is key. Balloon Boy is a compelling story no matter how you slice it, but imagine if we’d only found out about the story after the fact? The story would have been, “Worried family breathes sigh of relief after discovering their son wasn’t in soaring balloon as suspected.” A bit of a yawner compared to the way the story actually unveiled itself moment-by-moment.

The best way to tell a pet’s story (or any story) is to give it a beginning, middle, and an end, and to tell it as it happens. Give your readers, viewers, followers, and friends a chance to change the course of the story, to determine how it ends. Tell the beginning of the story first, and present the call to action. The middle of the story is where we have our chance to invite the public to follow the journey and to interact with it. Make sure to give compelling updates. Finally, report on the end of the story, whether it’s heartbreakingly sad or incredibly uplifting.

4. Crave fame… for your animals

Richard and Mayumi Heene have something that all master self-promoters share: a burning desire for fame. Most of us in the animal welfare community don’t have that quality. That’s ok… few people in the world do, and those of us who don’t tend to look at them as narcissistic. Time to rethink things, folks. We need to crave fame, not for ourselves, but for the animals in our care, for our shelters, and for the issue of homeless pets in general. Leap on every PR opportunity! Create new ones! Let’s be the biggest, loudest stage-mothers we can be, all for the good of the pets in our shelters.

You’re probably thinking of other lessons we can learn from the Balloon Boy incident, so let’s hear them! I want to hear your comments. May your pet-adoption PR efforts soar effortlessly through the universe like a giant… well, you know.