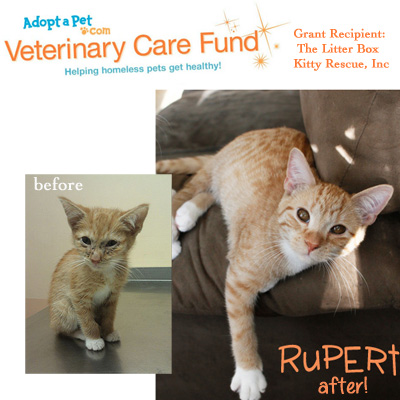 We are so happy to be able to share with you some more stories from one of the Adopt-a-Pet.com Veterinary Care Fund grant recipients! The Litter Box Kitty Rescue, Inc. is one of 10 grant recipients this month. (You can see all the recipient’s applications here!) In the last few months of last year, our grant program accepted applications from shelters and rescues across the USA and Canada. All of them already take advantage of the services we offer to help their pets get seen and adopted, by listing their pets on the Adopt-a-Pet.com website, and the grants are just one more way we help them help the pets in their care go from sick and injured to healthy and adopted! The Litter Box Kitty Rescue goes to amazing lengths for cats and kittens. Here are the stories they included in their grant application.

The Litter Box Kitty Rescue, Inc. writes: “We have multiple kittens who have recuperated through illness; they have done so with lots of eye medication, lots of antibiotics, and lots of TLC.  Meet a few of our rescues!

Rupert was a mere 4 weeks old when he was dumped at our doorstep.  He was very tiny and very sick.  He had goopy everything and was just plain ‘out-of-energy’.  We took him to the vet and boy did he have anything and everything going on.  His fecal came back positive for 2 different parasites, he had ghiardia,  ropey intestines, and to beat all an upper respiratory infection due to his lowered immune system from all his other medical issues.  As treatment began we noticed a small incline in his health.  His upper respiratory infection did not go away and we were up to see the vet again.  Poor little Rupert had another kind of worm and was dehydrated, and still under weight.  We continued treatment again and noticed his health improving a bit more.  He still didn’t come out of his upper respiratory infection.  The next vet visit showed us that his ghiardia was gone, his worms were gone, but he had manifested  the herpes virus.  We began treatment and his symptoms were still existent.  We returned to the vet three times and treated Rupert with three different remedies.  We finally had a breakthrough and he started gaining weight and playing with the other kittens.  Now, funny story about Rupert.  The first 2 months of his life he was sick, annoyed by the jubilance of the other kittens, and smaller than most of them.  Now he was a strong boy who could finally ‘get down with the boys’.  On the bed one night, as Rupert is taking his first steps to becoming a wild child, he is darting from here to there and pouncing on all that moves; all of a sudden with zero hesitation, he stops, gives a ‘I am very sorry, but I’m having too much fun to stop and do this correctly’ look, and pees a small flood on the covers.  With no regret he bounds to other end of the bed and starts wrestling with another kitten.  I looked at my husband with a bit of disbelief and a bit of triumph- that little Rupert felt better and he couldn’t get enough of it!  Currently he is a tad smaller than most his age, but still gives them a run for their money.  He is smart, affectionate, and does not pee on the bed at all!

Lydie came to us at 3 days old.  She was the first to open her eyes and the first to take to a bottle.  As she began to take her steps and play with her siblings another of the kittens became lethargic with bloody diarrhea.  He began coughing and then paralyzed from his neck down.  The emergency vet thought he had pneumonia and was aspirating on fluids.  Upon returning home, early in the morning, we noticed another of the litter mates was exhibiting similar symptoms, we did not make it to the vet before he passed away.  Two days went by and as we thought we had passed our ‘loss’ stage, another of the litter mates began having bloody diarrhea and rapid breathing.  Not too much longer he was gasping for air.  We made our way to the emergency vet with two kittens.  Lydie who was paralyzed in her back legs and her litter mate who was on his way ‘out’.  We were unable to save her brother, who was was diagnosed with Panleukopenia.  Lydie was given extensive medications and began walking once more after small massages.  She gained weight, played with the other kittens, and has grown up right before our eyes.  She is truly our miracle baby and a new member of our family!

Darla came to us a bit under the weather.  She was sneezing and had a goopy nose.  We administered antibiotics and it cleared her sneezes up, but we noticed her eye was becoming cloudy.  We made a vet appointment and the diagnoses was not positive for Darla’s eye.  She had the herpes virus and her eye was worse than suspected.  We were sent home with eye drops, pills, and to expect an eye removal surgery in the near future.  We knew we couldn’t let her lose her eye so we washed, picked, and administered drops a bit more frequently than we were told to, prayed and gave lots of kisses.  She was more than happy to let us medicate her and even began giving kisses back.  She made a full recovery with maybe a pin prick of cloudy white in eye.  She is a joyous little cat who is happy go lucky and LOVES to give kisses, too many kisses…A LOT of kisses!

We don’t exactly look forward to more of these cases, but we welcome them because we know we can handle it, with a bit of faith, perseverance, and love we can make each and every one of them feel better!

Thank you to The Litter Box Kitty Rescue, Inc. for these incredible before and after photos and stories, and for all they do helping sick and injured cats and kittens find loving fur-ever homes!