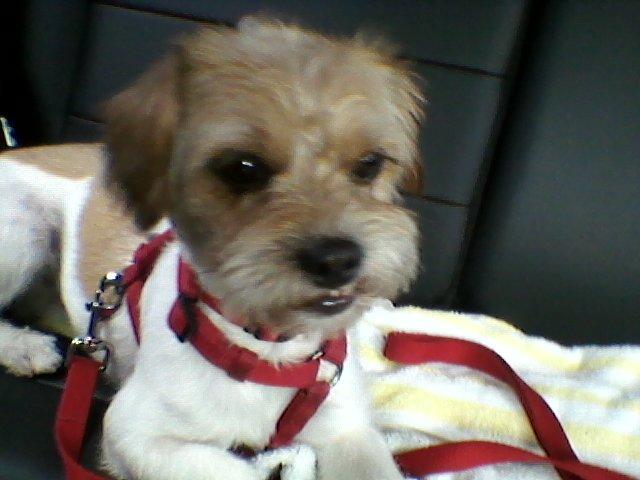 Yay! It’s time for another Happy Beginnings story, about a homeless pet that found a new loving home, thanks to Adopt-a-Pet.com. If you adopted a pet that you found thanks to Adopt-a-Pet.com, we’d love to hear from you! Send your adoption story and photos of your adopted pet to info@cms.adoptapet.com. Now back to our story… Lillian writes: “I found my pet on Adopt-a-Pet.com. Last year my Silky Terrier, Cody, was diagnosed with lymphoma and sadly had to be euthanized. I was so heartbroken. I swore that would not get another pet, I would be tied down, it’s too painful when they die etc., etc. But before I went on vacation, I put in some criteria using Search Saver on the Adopt-a-Pet.com website. When I returned I had an e-mail from Adopt-a-Pet.com, there was this dog called Brownie. I sent the e-mail to my friend, who is a huge dog person, one of her dogs is a rescue. My friend said to call that I have nothing to lose. I called, spoke to the person at Animal Friends of Connecticut and told her that I was interested in Brownie and would like to come and see him.  I made an appointment, had my application in hand and my friend and I set out for the long drive to Avon, CT., to the vet that had Brownie. Prior to going to Avon CT., I had a home visit done by a local rescue, so all AFOC had to do was call them.

Brownie came into the room at the vet’s and was very excited and nervous. His story was that some family gave him to some guy because they were moving, but the guy had two big dogs and was afraid Brownie would get hurt, so he surrendered him to AFOC.

Brownie was neutered, had his shots and I had a month to bring him back if it didn’t work out. I remember thinking, how could you keep a dog for a whole month then give him back. I adopted Brownie and we left for the drive home after the assistant wished Jack a nice life.

The rest of the story:

Jack (a.k.a. Brownie) just had his anniversary/birthday on July 7th he is about 3 years old. He is the most wonderful dog, I have had 3 dogs but he beats them all. He is loving, happy, protective and king of the house. He is such a joy, my family has fallen in love with this little guy and when they visit he just goes bonkers. I never thought that I would feel this way about a dog that didn’t start out as a puppy from a breeder. By the way, Jack is part Jack Russell and part Shitz Tzu (sp?).

I recommend adopting to anyone who is interested in rescuing/adopting a pet, besides there are too many animals that need a loving home. I have not regretted rescuing Jack for one second.”