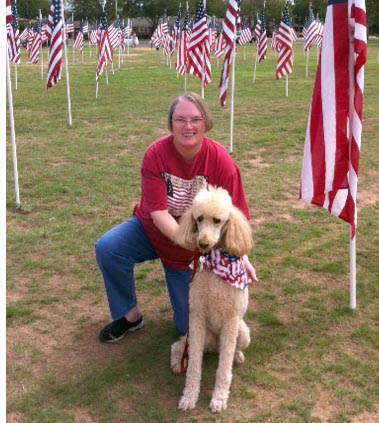 We loving sharing Happy Beginnings stories about happily adopted pets, and here’s a lovely one about Lilly… “I adopted Lilly, a pure-bred 18-month-old Standard Poodle, through your site in September of 2008. I had been actively searching for a poodle to rescue for a couple of years. I made a 650 mile round-trip from Lubbock, Texas to Weatherford, Oklahoma, between two very wet storms, leaving after work on Friday, and returning Saturday. I woke up several times Friday night, thinking the storm was causing flooding. I discovered my room was next to the run-off drain for the building! Raining, yes; flooding, no, thank goodness! Lilly and I had lots of time to bond in the car. I took a water dish, dog biscuits, towels, and a collar and leash. While she never slept on that trip, she didn’t try to wander into the front seats or cause any problems. We stopped several times, and she was shy with strangers, especially men. We were met at home by my daughter, who had just moved to her new home, and she called Lilly “Sweet Pea”. It stuck, and she’s still Sweet Pea to my daughter. We also introduced her to the cat, who allowed her to stay.

We’ve had almost five years together. I never could have hoped for a better dog! Other than the “counter-surfing” that Standard Poodles are known for, and ingesting some strange objects while she was still young, we haven’t had any issues. She is smart as a whip, and can learn a new command within minutes. She still doesn’t regularly respond to “come” or “stay”, but she knows what they mean! Everything else has been a piece of cake.

Since September 11 is the day I found her in my inbox, it’s kind of our anniversary. I’ve attached a picture of us in a field of flags in Lubbock last September 11.”

Thank you Darla for sharing your story, Lilly’s photo, and for adopting a pet! Did you find your newly adopted pet on Adopt-a-Pet.com? Email your story and photo to info@cms.adoptapet.com if you’d like to share your Happy Beginning and inspire others to adopt too!