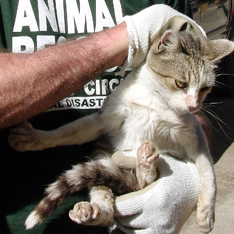 On February 27, 2010, an 8.8-magnitude earthquake crashed into Chile, displacing some 2 million people. Soon after, two tsunamis swept over coastal towns, along with 20 aftershocks (as high as 7.2 and 6.9). A group named Kinship Circle, who worked with Adopt-a-Pet.com’s president, David Meyer during the Katrina rescue, has now turned its efforts to work alongside Chilean veterinarians to save animals.  But they can’t get them off the streets without your help.

People, made homeless by the quake, are unable to supply food or medicine to their animals. In the short term, animals require treatment for gashes, broken bones, lost limbs, dehydration, mange, worms, parasites or other illness. In the longer term, they need vaccines, nutrition and sterilization. In Calita il Fiernillo, where the quake caused an oil spill, dogs and cats wade through black-water puddles. Coastal towns like Villa Futura, Santa Clara Talchuano, and Calita Los Morros, swarm with strays and other animals abandoned in the disaster.

Click here for more information and how you can help!