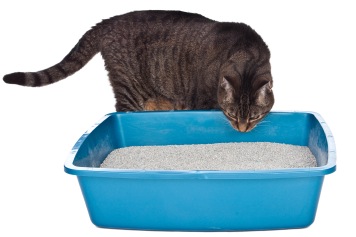 One of the most frustrating behaviors for a cat owner is litterbox issues. If only cats could talk to tell us why they weren’t using their litterbox! There are so many reasons cats stop or won’t use their litterbox 100% of the time, it can take some detective work to figure out the reason or reasons. This blog article will give you a step-by-step process to figure out why and fix the problem. Myself and many cat owners I know have personally used these steps to solve litterbox problems with many cats, from young kittens to seniors. Litterbox issues are one of the main reasons cats are surrendered to shelters, but often it doesn’t have to be that way. To make these steps easier to understand, I’ll call your litterbox-avoiding cat Kitty.

This article was originally published in 2010. Since then, with two more years of using these steps, we tweaked them for slightly FASTER and easier (on both you and your cat) fixing of litterbox problems. So…

Click here for our current improved steps to help your cat litterbox issues!

Our original steps still do work! We’ve kept them here for archival purpose:

Cats can be sensitive and effected by your mood. They might not show it in a way you understand, but if you are stressed or unhappy when your are cleaning their litterbox, Kitty will pick up on that and may think that’s a reason to avoid the litterbox! Can you change your litterbox habits? Sometimes buying a pretty new litterbox and scented litter makes you feel better, and then “miraculously” your cat will start using it again! Also, as your Kitty gets back on track, don’t forget to lavishly praise Kitty each time they get it right, and reward him or her with their favorite treat.

Step 1.
The easiest and instant thing you can try is a second, brand new litterbox with new litter in a new location. If possible, remove any items they went on outside the box (carpets, etc), clean the area with an enzyme pet-cleaner, and keep them way from that area by covering it with a plant, coffe table, or best yet, close them out of that room.

Sometimes the new location is not where you want the litterbox, but you may have to start with it there, and try gradually (one foot a day) move it back to where you want it located. Many cats prefer scented (or unscented) clay litter, or even potting soil or sandy dirt. Nothing fancy! There is even a litter product called “Cat Attract” that is specially scented to attract cats to use it, and it worked instantly for my friends new foster cat who was peeing on all her dog’s beds. But I’ve had the same instant “fix” with regular clay clumping litter. I prefer the all-natural litters for the health of my cats, but some cats just don’t like them!

Step 2.
If the brand new box, litter & location didn’t fix your problem in one day, next you should take Kitty to your vet ASAP to rule out any medical causes. Often times cats will stop using their box when something is medically wrong and they aren’t feeling well. Once you’ve ruled out a medical problem, you can continue the detective work it takes to find out what is the problem, and then be able to fix it! Here are the steps most vets will recommend:

1. Your vet does a urinalysis to check for infection.

2. Your vet does for urine CULTURE for elevated bacteria.

3. While you’re waiting for the culture test results (they can take up to a week) confine Kitty in your bathroom with their litterbox, bed, food water. Kitty will likely not be happy being locked in the bathroom, but this step is essential, and it is only for  a week – by comparison, if you boarded your cat at the vet, they would be kept in a kennel smaller than most bathrooms.

4. Make sure the box is REALLY clean. Dump all the litter out, scrub it with a cat enzyme cleaner (not an ammonia product!), start with 100% fresh new litter.

If Kitty’s two test results both come back negative, and the vet says Kitty is healthy, then see if Step 3a or 3b applies to your cat…

Step 3a. Kitty did NOT use the box while confined (skip to 3b if he did)

Kitty may not like the type of litter, the depth of litter, or the style of litterbox. Try one of these changes for a couple of days, then try another one if that didn’t work. Yes, this takes a while, but there are so many options! In this order, try:

Some cats have a painful association with going inside a box. So if all the above fails, cover the floor with newspaper-  every square inch! If Kitty was going in the tub, put the newspaper in there. Most cats will go in one spot on the floor. Gradually pick up the newspaper where the cat is not going (one or two sheets removed a day). When you are down to two sheets where Kitty is going regularly, take a sheet that has some urine on it and put it on top of a flat piece of cardboard box, or on a cookie tray.

Now there should be newspaper only on top of the box/tray, and none on the floor. If Kitty continues to go on the paper on the box/tray, try a brand new low-sided uncovered litterbox (so it won’t smell anything like litter) in the same spot, and put some urine scented newspaper in it. Then the next day, try putting a handful of a new kind of litter in it, that doesn’t smell anything like their old litter. So if they were using clay litter, try the pine dust or ground up corn litter. Often with baby steps you can have them graduate back up to a real litterbox with litter, but sometimes you may have to stick to newspaper or dirt. Its better than your laundry basket! If at any point during the re-introduction process they revert to going on the uncovered floor, do not panic. An accident or two may happen. But if it’s more than once or twice, you should take a few steps back and proceed more slowly. If the cat was really traumatized, it can take weeks. But a few weeks in a bathroom, while not fun, is worth the chance of getting your cat back to using his litterbox (and it’s a lot nicer than returning your cat to the shelter).

Step 3b. Kitty DID use the box while confined

Step 4.
If you’ve tried the first 3 steps without success

With patience, deductive powers and our suggestions, we hope your cat will be using his litterbox very soon!
Learn more about Jennifer, our blog author at Google+