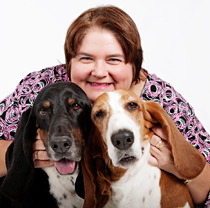 Over the past six months Arizona Basset Hound Rescue (AZBHR) rescued an incredible 52 Basset Hounds from a puppy mill in Pinal County. They were able to save and care for so many dogs because of their amazing big network of foster homes (97 dogs in foster care as of today!), volunteers, and donors with very big hearts! We had the chance to speak to AZBHR’s president, Kim Bruck, not only about this wonderful rescue’s work over the past decade, but how she’s helped over the past 5 years. As our Hero of the Month, we applaud her and all her volunteers’ efforts in saving the lives of so many Basset Hounds in need – over 1300 since they started, with 158 so far in 2009 alone!

Tell us about your rescue of 52 Basset Hounds from a puppy mill: How did you get involved? How did you manage to save so many?

Kim: AZBHR worked with Pinal County for over two years trying to close down this breeder and is very thankful to Pinal County and all their staff for the efforts in getting the owner to surrender the final group of Bassets as of Monday, August 3rd. As a result, AZBHR has 97 Basset Hounds in foster care as of September 10th… yes, 97! That is a RECORD for us as we usually average 60. Of the 97 dogs, there are 21 that are forever fosters who are seniors or have medical behavior issues and will be with their foster homes until they go to the Rainbow Bridge.

AZBHR would NOT exist without the many volunteers in our organization, past, present and future. AZBHR is an all-volunteer organization with NO paid staff. It’s because of the dedication and long hours our volunteers put in that we can help all these hounds! Most of the dogs have been adopted, but many are still waiting for their forever homes.

When and how did your rescue get started?

Once upon a time, Basset Hound “rescue” was something performed by Basset breeders and breed club members. In the late 1980s, when it became apparent that the need was far greater than the individuals and clubs could provide, the Basset Hound Club of America formed a committee called B.H CARES. By the early ‘90s, it was obvious that the rescue efforts were becoming greater than the club could handle, and B.H.CARES became a separately incorporated entity. We had association with the local groups, or “chapters,” who were totally autonomous. The national group served the same functions as had the original BHCA committee. One of the board members helped local Bassett Rescuers launch Arizona Basset Hound Rescue, filing papers of incorporation in 1999.

You have some interesting fundraisers going on right now! Tell us about your prizes, and how did you get them donated?

We are definitely in need of funds – our veterinary bills are currently over $70,000! We sent over 5,000 emails and letters to companies for donations for the Basset Ball. AZBHR also has a volunteer who does fundraising programs, Valerie Cree and she sets up the fundraisers such as the current Raffle for Ron Burns Limited Edition Artwork, titled Furever Homes™. The grand prize winner of the raffle will receive a limited edition of their choice from artist Ron Burns valued at up to $2,000. Additionally, three runner-up winners will be selected to receive a $100 gift certificate for Burns fine art. Visit http://www.ronburns.com to see Ron Burns’ limited-edition work. Raffle tickets are only $5 each, or a quantity of five is available for $20. Tickets go on sale September 1st and the last day to purchase will be October 23rd – drawing will be held at the AZBHR Howl event, but you do not need to be present to win. http://www.azbassetrescue.com/Events/Events.htm

What is the best part about rescuing Basset Hounds?

Knowing you have saved their life! That is what it is all about.

You can see Arizona Basset Hound Rescue’s adoptable dogs at http://www.adoptapet.com/adoption_rescue/70689.html and also see even more photos, stories, & news coverage videos on their own website http://www.azbassetrescue.com too.