This past weekend, at a brand-new event called the Purina Pet Project, the folks at Purina once again showed their enormous commitment to supporting not only homeless animals, but the shelters and rescue organizations that care for them.  I had the pleasure (and it was!) of attending this event, along with Adopt-a-Pet.com’s director of animal shelter outreach, Jennifer Jacobsen.  We were both so impressed with what we saw, and absolutely inspired. 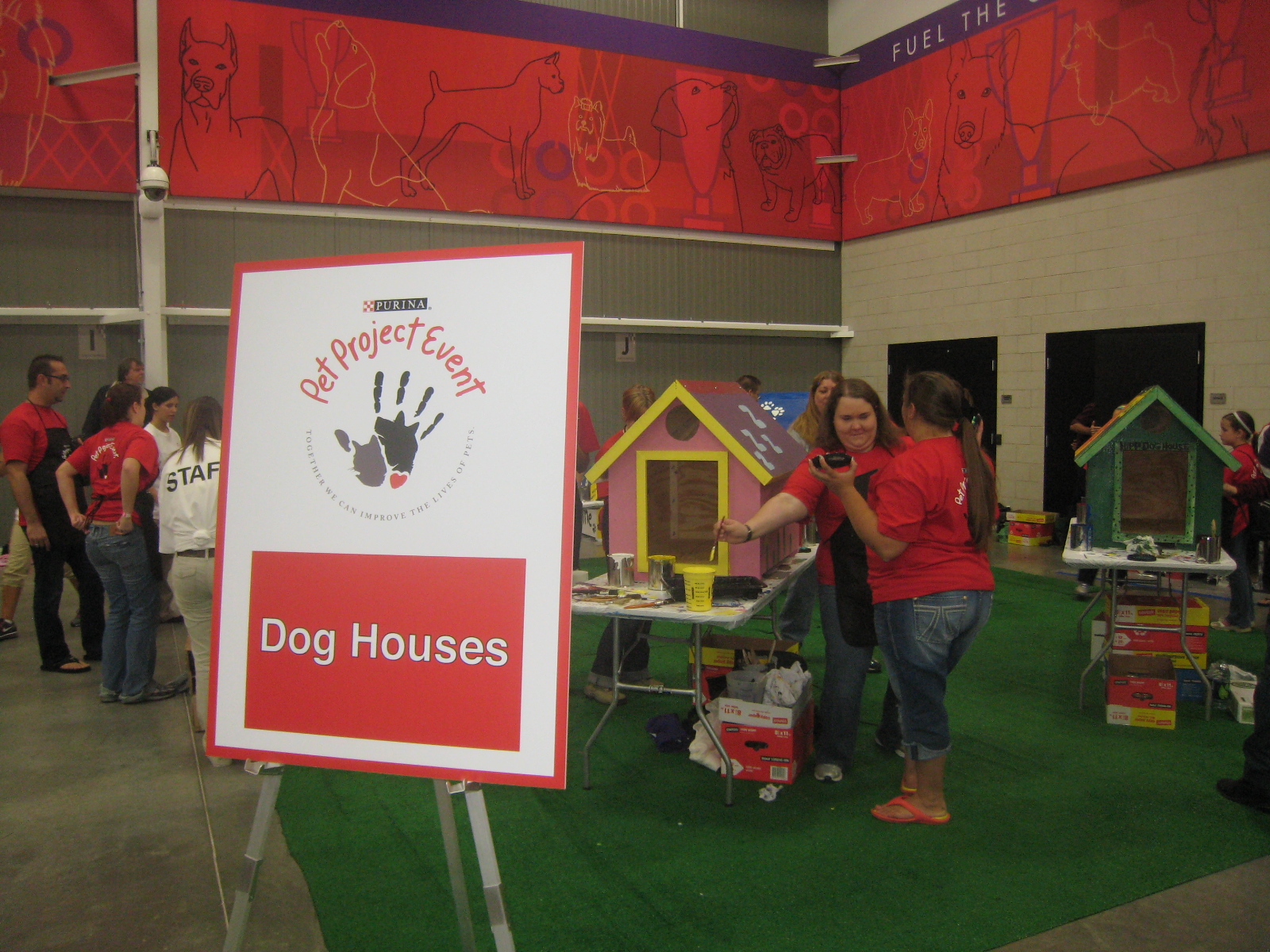 Here’s a little background: every year, Purina employees participate in a day of volunteerism to help St. Louis-area animal shelters, taking part in a variety of projects like assembling dog and cat beds, doing shelter makeovers, and making blankets to keep shelter pets warm .  These projects really make an impact on the animal welfare community in St. Louis.  This year, our friend Caroline Holke at Purina had an amazing, big idea, which began with a simple question: If the employees of Purina could make such a big difference in a single day, how much more could be done if the general public were given the opportunity to volunteer as well?  Caroline’s idea was embraced by her colleagues, and presto! The Purina Pet Project was born.

The event was held on Saturday, October 1st at Purina Farms.  Before the doors opened to the public, we took a look around. More than 30 different projects were waiting to be completed. More than 30 rescue groups and shelters were there with adoptable pets on display.  There were empty troughs waiting to be filled with donated items from a wish list Purina had provided to the public, things that shelters really needs like toys, bleach, and other supplies.  An empty volunteer sign-up sheet sat at a booth dedicated to the biggest project of the year: a complete makeover of the Five Acres Animal Shelter, which was to be completed the following weekend, if enough volunteers could be recruited.  So many opportunities to help…but would anybody show up?

The doors opened, and we got our answer: a resounding YES!  The folks at Purina were really hoping they’d get 1,000 people to come out and help.  Instead, they got about 2,800!  People poured in the door, many carrying items to donate, and all ready and willing to lend a hand.  It was a beautiful thing to behold.  It was especially wonderful to see so many parents and children working together.  Kudos to those parents for teaching their children the spirit of volunteerism (and kudos to the children who taught their parents, of course)!

220 pet blankets were made

600 pet bowls and 550 bandanas were decorated

$2,000 raised from games and raffle tickets –the winner of the 50/50 raffle donated the cash back to the animal shelters

12 troughs were heaping with donated items

Fabulous, in other words.  Thank you, Purina, for caring so much about homeless animals (and the people who take care of them)!

And here are some photos of the event:

Jennifer puts the finishing touches on our booth

Jennifer shows off our poster giveaways

Our “My best friend is adopted!” posters

Volunteers signing up for the shelter makeover project

So many ways to help!

Rescue groups did adoptions all day

A cutie for adoption