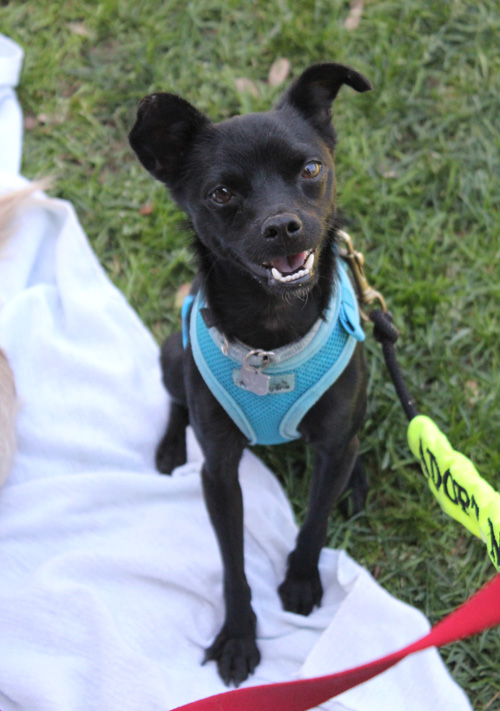 One of my foster dogs, Iggy, came to me as a super shy young dog. At the shelter, he cowered in the back of the kennel. He was scared of the water hoses used to clean the kennels, running water, people in uniform (like the kennel staff who sprayed the kennels down to clean them), loud noises, and a lot of other things — so essentially, my ideal project dog to foster! I love fostering shy dogs and helping them blossom into happy adoptable dogs. Each shy foster dog is like a puzzle that takes time, patience, training, and of course love. I’m always learning something new from my foster dogs, like when Iggy suddenly became terrified of something unexpected…

…getting his walking harness put on! I’d been fostering him for a few weeks and his confidence was growing every day. Then one day, something happened. I wasn’t even aware of it until I went to put his harness on him for a walk — his activity in the world aside from squirrel chasing — and he cowered in fear and submissive urinated all over both of us! We both seemed pretty surprised! I cleaned us both up and then went carefully again to put the harness over his head (no problem) but when I went to buckle it around his chest, he trembled and peed again, poor little guy. The next day, the same thing. So instead I slipped a martingale collar on him and clipped a leash to that and we went for our walk, no problem. But the harness had become SCARY! I must have accidentally snagged some of his fur when I buckled it without realizing. Since he can pull super hard when he sees a squirrel, a harness is a safer choice for him.

I needed to re-condition him to not think the harness clipping on was scary.

(Disclaimer: I am not a neuroscientist, so this is my layperson’s understanding of the learning and memory process!) Dogs and other mammals encode experiences as memories in their brains. A memorable event, like pain, causes neurons to fire more frequently. They make a “path” that will be followed again in the future. So in Iggy’s harness fear case, the harness being attached made a path of “That hurt that’s scary!” So the next time that event started to happen, his brain said, “this is going to hurt!” an he urinated in fear.

What I needed to do is make a new path. One way to do that with a food-motivated dog is overwrite the fear response with an equally or more memorable thing and action — like awesome treats for a different action!

For Iggy, since he was super good at the sit command, I tried that first. I put the harness over his head, and instead of reaching to snap it, before he had a chance to pee, I quickly stood up and gave him my hand & verbal signals for “sit.” He looked a little confused but he sat – and then I gave him a huge handful of awesome treats! He was like, “WHOA! What just happened?!?!? That was awesome!!” I then slid the harness off and did it one more time, then again slid it off and put the collar on instead and we went for our walk.

I don’t really know how many times it would take Iggy to “re-write” the bad memory, so I gave it eight times: just before our two walks a day with two oh-my-dog-tons-of-treats rewards each time. On day three I then started just pulling the buckle around his belly, not fastening it, and then doing the sit-treat. The first time I did that he moved and the one side of the buckle hit the other side of the buckle and he tail tucked (a precurser to scared peeing) but quickly recovered when I stood up. Did that for more two days and then tried to oh-so-casually clasp the buckle. He actually sat in anticipation of the sit/treats which made it easier and as soon as the buckle clicked, he got a HUGE handful of treats and off we went on our walk!

So now Iggy sees the harness and he sits! I reward him sometimes (slot-machine style) and he’s happily replaced SCARY with SIT for his harness behavior.

Best of Dog Behavior and Training |