Getting Along with Your Pet < Translating Cat Chatter 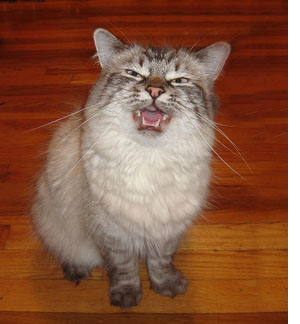 Have you ever been relaxing with your favorite cat only to be startled by one of the noises she made? Purring and hissing are common with cats, although frequently misunderstood. Howling happens occasionally with most cats, but can still be unnerving. Then there is the chattering some cats do. This is a noise that will probably make you think your cat needs his pet meds adjusted. Don’t worry, there are logical, even scientific, explanations for most of the noises you’ve heard from your favorite feline. Are you ready to translate your cat’s chatter?

You probably think Fluffy is happy and content when she is curled up in your lap purring. Who can blame you? You pet her and she purrs, of course she is happy. Cats are also known for purring when they are with their kittens, also a happy time. The only problem is that cats also purr when they are under considerable stress, which is why a cat that is being examined at a veterinarian’s office might also begin to purr.

According to some studies it is evident that certain ranges of purring also lead to increased bone density and improved muscular healing. This leads some experts to believe that purring is actually a form of self-healing in addition to a form of communication. Of course, when your cat purrs while being petted she could just be communicating that she’s happy.

Have you ever heard a cat howl? It is one of the eeriest sounds I have ever heard. As much as dogs howl it shouldn’t be that unnerving to hear a cat howl but it is. Fortunately, most cats only howl when they are anxious or in pain. These are conditions owners have some control over so most cats have few occasions to practice their howling. Sadly, as cats age this form of communication becomes more common.

This isn’t because they are more anxious or in more pain, although that may contribute to the increased vocal acrobatics. Older cats are more susceptible to Cognitive Dysfunction Syndrome, the animal version of dementia. Complicating matters is that cats of a certain age are also likely to have reduced hearing and sight capabilities. Not being able to see or hear what is going on around me and being more confused in general would probably make me howl too.

You may think you have hissing all figured out, you might even be mostly right. Most people know that if a cat hisses they are unhappy campers and everyone needs to back away slowly. We expect cats to hiss when they meet animals or people they don’t care for, when they are scared, and even when they are simply startled. What is more confusing is why cats hiss when they are being petted. We are usually waiting for that magical purr when snuggling with a cat and it can be quite shocking to get a hiss instead. However, the same repetitive motion can actually be uncomfortable and occasionally even painful for cats which is why they will sometimes hiss and become aggressive during cuddle sessions.

Chattering is probably the least understood form of cat communication. The sound varies by cat but is usually described like a squirrel chattering or a bird chirping. The reason a cat does this at random times and in such a unique way has finally been partially explained. The proof came from a study of monkey vocalization. While they were being recorded a wildcat popped onto the scene and began mimicking the calls of the soon to be prey. The theory is domesticated cats are doing the same thing when they see squirrels or birds. Cats are mimicking potential prey targets; something to keep in mind if your cat begins to sound like it can talk!

What unique sounds does your cat make and what do you think they mean?

Jackie is a writer for 1-800-PetMeds, and loves to help and support the pet community. You can find Pet Meds on Twitter or connect with Pet Meds on Facebook.