Getting Along with Your Pet < Who Did Freud Use for Therapy?

Who Did Freud Use for Therapy? 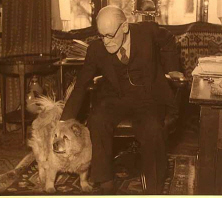 As a psychologist — one deeply aware of the powerful connection between humans and animals — I wanted to share some little-known information about another “believer,” who provided therapy from a small Vienna office at the turn of the previous century. You may know him best as the father of psychoanalysis: a cigar smoking Austrian by the name of Sigmund Freud. But what you may not know about this mental health pioneer is that he employed not only a couch as a therapeutic tool, but he also typically had one of his dogs present during client sessions. While Freud’s own affinity for dogs was perhaps the initial reason for having them present as he worked, he soon witnessed the therapeutic benefit they bestowed upon clients.

Freud was partial to chows — a dog who, like the pit bull, is now often maligned by erroneous media reports. Sadly, this often results in many chows landing in already overcrowded city shelters. If only our current sensationalist media outlets could look to history on occasion and glean some wisdom from great thinkers such as Freud, perhaps fear-based actions could be minimized.

For one thing, Freud noticed that a dog’s presence acted as a calming influence on his patients. Children and adolescents in particular seemed better able to disclose painful information with a dog nearby, but adults benefited in a similar way as well. It seems that the mere presence of a dog in the room lowered the barriers of resistance all humans erect to avoid painful subjects, and so facilitated the therapeutic process. What Freud surmised from these observations was that the unconditional regard of a dog was healing. The steady canine presence in the face of what a human might experience as painful or embarrassing provided containment and a safe place of reassurance.

Freud often referenced one chow in particular, Jofi, whose response to clients offered him clues to a client’s emotional landscape. Freud noted that Jofi would settle farther away from clients who exhibited anxiety and stress, but remained close to those who seemed depressed — close enough to be touched by the client if he/she so chose.

Jofi could also indicate the end of a 50-minute session… finish the post by clicking here.

Pia blogs often at The Daily Wag on MarthaStewart.com, the home of episodes from Francesca and Sharkey – Martha Stewart’s two dogs. Dr. Pia Salk is a psychologist, animal welfare advocate, and expert on the human-animal bond. Pia frequently highlights the important role that animals play in our lives and how our societal treatment of animals conveys important messages to our youth.