Best of Cat Health < Why do cats love catnip?

Why do cats love catnip?

Posted by Jennifer on February 3rd, 2014 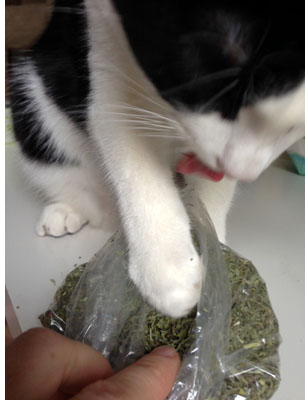 One of the great mysteries of life – why do cats love catnip? I am being a bit silly, of course, but so are most cats on catnip! In the photo you’ll see one of my  foster kittens who happily jumped up on to the table to help me get an appropriate image to go along with this article. He’s just 6 months old but already he’s quite the catnip affectionado! He and his brother have loved catnip since I got them a couple of months ago, but sometimes kittens aren’t interested until they are older. They will even bat around the tin that it’s stored in to keep it safe from their curious paws! Other foster kittens and cats I’ve cared for have ranged from totally disinterested in cat nip, to one who got so wild from the “catnip crazies” even from just an old catnip-stuffed toy that he would first attack the toy, then try to attack anything else that moved near by! (He was put on a permanent nip hiatus.) In my experience, most cats either get slightly more playful then take a nap – or go right to the nap! Some like to eat the leaves, some roll around in it, and some do both.  So what is it about catnip that affects cats behavior?

Catnip is simply a dried herb. You can grow catnip yourself from seeds, purchase a potted plant version of it, or buy it already dried. The dried form comes in three primary forms: either still on the stem in dried clumped-together buds, loose whole leaves, or loose crushed leaves. The fresh live catnip plant doesn’t seem to have any affect on cats. It’s only after it’s been dried that the smell of it starts to have an effect on felines. I’ve read that it a natural chemical within the catnip, called nepetalactone, that is what they are reacting to. Because they often eat it and the certainly are smelling it, I prefer organic catnip, which is usually readily available in most retail outlets.

Can cats overdose on catnip? Technically, a cat could eat too much catnip, just like they could eat or drink too much of anything, and get sick from it. I’ve read could more easily happen if you have a cat that likes to eat fresh catnip. My vet says catnip overdose would be really rare – especially with the dried versions, cats will self-regulate – its not like a can of cat food where they will eat the whole thing! To be safe, you can give your cat a pinch or two once a day. It is not harmful to their health, and I think the amusement and stress relief they get from playing or napping adds some nice variety to their kitty lives.