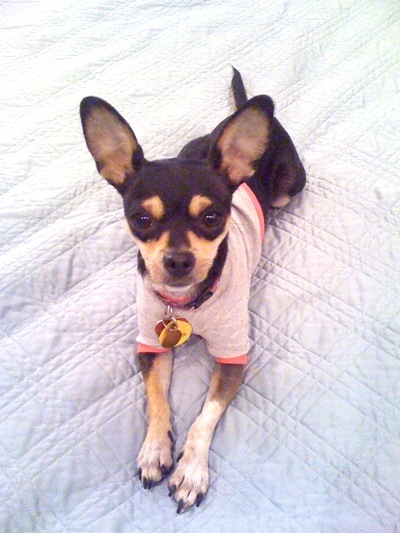 For this blog post we are trying something a little different! This is a personal story written by Noelle Newby, when her newly rescued Chihuahua became paralyzed. We recently shared another wonderful article from our Petcentric friends about how amazing disabled animals can be as pets, and how you can find disabled pets for adoption by clicking “special needs” when doing a dog or cat search at www.Adopt-a-Pet.com. “Bearing witness to her spunky persistence fills me with awe and wonde,” Newby writes. “She’s enjoying life, despite the setback.” We can learn so much from our pets! We hope you’ll find this story as inspiring and beautiful as we did.

With a B.A. in English, I’m embarrassed to admit that until recently, I only associated this D.H. Lawrence poem, “Self Pity”, with an image of Demi Moore shaving her head and taking a beating to become the first female Navy Seal in the 1997 blockbuster, G.I. Jane.  These poignant words, which conjure a stark and brutal visual, came alive for me a month ago, when my Chihuahua rescue, Chula, became paralyzed.  Chula showed certain reactions at the onset of her paralysis – confusion, pain, and need – but never a shadow of surrender.

I however, was an emotional wreck.  I cried, Chula tried…tried to walk, recover, and persevere.  The vet diagnosed a slipped and ruptured disc; putting pressure on her spinal column to the extent her hind legs were no longer of use.  Emergency surgery was scheduled.  As I placed her in the vet tech’s arms, she licked my face eagerly – seemingly comforting me in the midst of her own crisis.

That day, and every day since, I have been amazed by this 6-lb wonder.  Emerging from surgery with an incision half the length of her body, she immediately began the transition from surviving to thriving.  Walking on her front legs with the help of a harness, she eagerly, if gingerly re-explored her yard, claiming dominance over every two and four-legged creature in my home.  Bit by bit, day by day she’s gotten better.  First flopping, then scooting, now walking on all fours; without grace, though not without difficulty.  She’s enjoying life, despite the setback.  I know it’s only a matter of time before she’s recovered – with a scar and perhaps a slight limp.  But I doubt these lingering imprints of injury will cloud her innate joy as she scampers sassily through the rest of her days.

Bearing witness to her spunky persistence fills me with awe and wonder.  What a role model she and her animal cohorts are; wired to survive at all costs.  They aren’t burdened with thought, regret, fear of future or, as Lawrence notes, self pity.  They live in the present moment, every messy, blessed one of them.  The weight of yesterday or tomorrow doesn’t suffocate them as it does us, their human companions.

I wish I could say the same of my own evolution in this life.  I’ve lost count of the times I’ve stalled, thwarting progress, wallowing, to throw frequent parties for myself – pity parties.  Rehashing wrongs committed/received, opportunities lost, pain suffered, and fretting over an uncertain future.  It amazes me how easily I get stuck.  I fall down, stay there awhile, force myself up only to fall down again.  Though with each stumble, I stay down for shorter durations, as I realize joy only accompanies me when I’m standing strong.  With every new adventure, mundane or audacious – I have the choice to succumb to old habits, or practice and embrace new ones.  While I know this on the deepest level – I, like all of us, can forget.

For the past 15 years, I suffered from debilitating migraines – unimaginable pain – daily and merciless.  ER visits were, at minimum, quarterly occurrences, and I dwindled to fewer than 110 pounds on my 5’10” frame.  Seemingly, my will to fight and rally vanished with each searing headache.  Ultimately, I admitted myself to an in-patient migraine program.  That last surge of will or submission – I’m still not sure which, saved my life.  I’ve been healthy for over two years now, and am thankful for another chance at living.  Unlike Chula, I have no visible scars from my experience – nothing that the outside world can point to and say – this person has survived trauma.  Like most of us, my scars are on the inside.  I still fight fear – fear that this reprieve is temporary, and that ghosts of pain and suffering hover above me, waiting for the opportune time to return.  But I will never be a willing host again.

As part of reclaiming my body, a statement to my renewed health, I’ve been training for my first marathon this coming fall.  I’ve always loved running, but have never attempted anything so drastic.  I’d like this for myself.  To tap into the well of strength I know my body is capable of, versus the physical and mental atrophy of its past.

Training for a marathon is no easy feat for anyone, but it is incredibly taxing on me – especially in the heated heart of the unforgiving Texas summer.  After a particularly brutal run recently, a heat-induced migraine washed through my temples, while a lingering psoas injury screamed, and my mind joined in protest – replaying old tracks like a skipping LP:  “I can’t do this. I’m not strong enough.  My limitations are too great.”  A wave of self pity started to engulf me as the harsh mixture of tears and sweat stung my eyes.  In that moment, the image of the little Chihuahua-that-could flashed across the theater of my mind, replacing the swell of “poor me” with hope and strength.  I remembered self-pity was a choice we humans have, not an innate reaction.  I chose to limp those last two miles with my head held high.  It was the best run I could do that day – and doing MY best is the crux of the journey – whether the course is five miles or 26.2.

I keep this tenet tucked carefully in my soul, and do my best to stay present.  If not, like the memory of recurring suffering, the hangover from a bad run or the worry of the next, overwhelms.  I do my best to disallow the perpetuation of this unhealthy pattern.  In doing so, I, like many of us, return; to life and the run.  I tie my shoes and steel my resolve to move forward.  At times I may flop, scoot or progress with great difficulty. But every once in awhile, I run and live with grace, speed and ease; the sweet reward for all the trial and effort. I guess we’re all wild things after all.