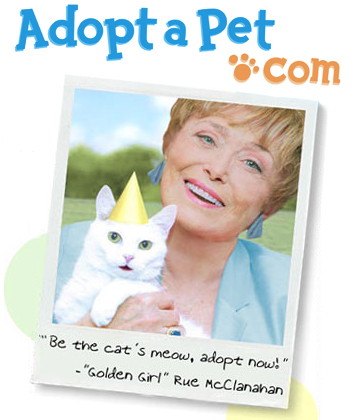 Abbie Moore, executive director of Adopt-a-Pet.com, released the following statement regarding the death of actress Rue McClanahan, whose image appears on the non-profit’s web site: “Everyone at Adopt-a-Pet.com is extremely saddened to hear of Rue McClanahan’s passing.  Ms. McClanahan, a noted animal lover, generously donated her time, energy, and likeness in support of pet adoption by appearing in an episode of our web series, The Save-a-Pet Show.  She also appears on the Adopt-a-Pet.com web site, fittingly, on the page where visitors can search for a shelter cat to adopt (http://www.adoptapet.com/cat-adoption).  We’ve always thought of her as our ‘Cat Ambassador’, greeting and encouraging all who come to Adopt-a-Pet.com with the intention of saving a cat’s life.

“In the episode of the Save-a-Pet Show in which she appears, Ms. McClanahan revealed the bottomless compassion she felt for all animals, dogs and cats alike.  In fact, she said, during the filming of The Golden Girls, she had eight cats and six dogs, all adopted from shelters or rescued as strays from the streets.  We thank you, Rue, for everything you’ve done to spread the word about pet adoption and the great example you’ve set as a wonderful human being.”

Adds Dr. Pia Salk, who interviewed Ms. McClanahan in the episode of The Save-a-Pet Show: “Rue graciously invited us into her home to shoot the episode and we surprised her by bringing some shelter kittens with us. There was a very sweet ‘little girl’ quality to her that comes out in the episode as she cuddles each shelter kitten and helps me name them! She was really lovely and so genuinely concerned for these kittens specifically, as well as the overall plight of shelter animals. She will be sorely missed by 2 –and-4 -leggers alike.”

The Save-a-Pet Show can be viewed here:  http://www.adoptapet.com/save-a-pet-show/index.html , or on YouTube at http://www.youtube.com/watch?v=e_lTujC5bBw