An Animal Rescue Run By Nearly All Children 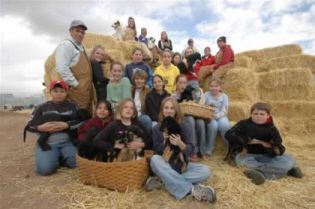 Hard workers who are committed to helping our county’s shelter animals come in all shapes and sizes. The Dalhart Animal Wellness Group and Sanctuary (D.A.W.G.S.) in the Texas panhandle is proof positive of that! This very special animal rescue group is run almost entirely by children. One historic spring in 2003, school teacher Dianne Trull was talking to her students about pet over-population and one child earnestly inquired, “Why do the dogs have to die?” Luckily, Diane was able to grasp the power in that moment. Unwilling to tell her students that they were powerless to help these homeless animals, she instead took it upon herself to empower these young leaders. As Diane puts it, together, her students, her family and she set out to “change how the world works.”

And change the world they have indeed! Both for themselves and for the more than 5,000 dogs and cats they have so far placed in loving homes. And they have done all of this in spite of tremendous obstacles.

Diane’s commitment, and that of her students, was tested early on when the community forced them out of their existing shelter and had them move over 500 animals during a blizzard to another nearby location. Regardless of season, the weather in Dalhart continues to pose some of the most greatest challenges; wind speeds up to 70 mph and temperatures that can range from 70 degrees one day to below zero the next. That’s not to mention the tornadoes and hurricanes that frequent the area.

However, Diane is reluctant… finish the post by clicking here.

Pia blogs often at The Daily Wag on MarthaStewart.com, the home of episodes from Francesca and Sharkey – Martha Stewart’s two dogs. Dr. Pia Salk is a psychologist, animal welfare advocate, and expert on the human-animal bond. Pia frequently highlights the important role that animals play in our lives and how our societal treatment of animals conveys important messages to our youth.