Pet Adoption News < Be a Part of an Amazing Transformation: Foster a Pet

Be a Part of an Amazing Transformation: Foster a Pet

I dare you to watch these two videos without being totally inspired.  Recently, our own Laurie Wisneski and her husband Frank opened their home to a special foster dog named Chauncy.  Frank, a photographer, volunteers his time with United Hope for Animals, taking amazing photos of the animals in the Baldwin Park Animal Shelter.

This first video is the “before” video.  It was taken when Chauncy, then called Champ, was still in the shelter, and was used to network him to rescuers and adopters.  As you can see, Chauncy was absolutely terrified.  Even while in the arms of a volunteer, he was trembling uncontrollably.  What you can’t see is that, while he was in his kennel at the shelter, he was an absolute wreck.  He was curled up in the corner, shaking, unable to deal with the stress of being in the shelter environment.  Luckily, Frank saw something in this little guy and when he returned to the shelter the following week and found that Chauncy was still there, he knew that he and Laurie were Chauncy’s only hope of making it out of the shelter alive.  So…check out this video first. 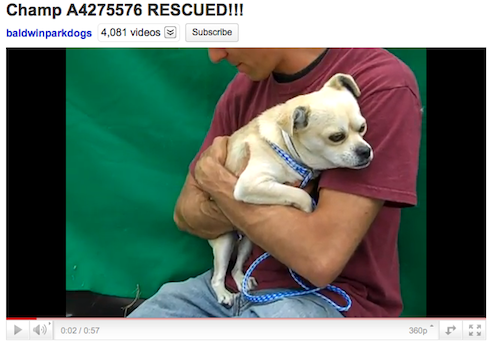 Pretty pathetic, am I right?  Well, prepare yourself to be amazed.  You see, this is Chauncy just a couple of weeks later: 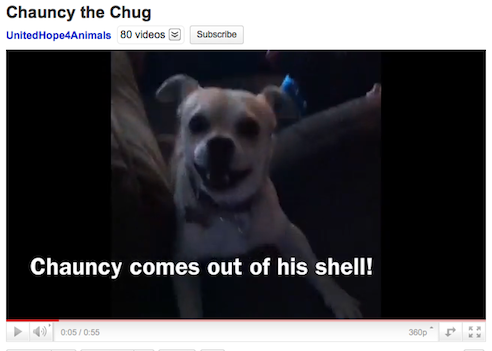 I don’t know about you, but I got a little teary when I watched that.  There are two important take-aways here:

1.  It is very difficult to get a true read on a pet’s personality while they’re in a stressful shelter environment.  Some dogs, wonderful dogs like Chauncy, just simply cease to function when surrounded by constant barking, people walking by the kennels, volunteers cleaning and feeding and bringing in new animals all the time, etc.  Coupled with the shock and grief of being abandoned by their owners or having been lost on the streets, it’s more than they can take.  Sometimes this stress and terror makes an otherwise sweet and docile pet appear to be aggressive.  Other times, like in Chauncy’s case, the dog simply retreats to the back of the kennel, curls up into a ball, and tries not to be noticed.  Unfortunately, when dogs aren’t noticed, they aren’t adopted.  So, take-away #1 is this:  please give these scared dogs, even those who are labeled aggressive, a very close look.  More often than not, there’s a diamond in that piece of coal.  (For an AMAZING, extreme example of a seemingly aggressive dog’s transformation, watch my friend Eldad Hagar’s video about a dog named Chase. Then, like I always do, spend the next six hours watching all of Eldad’s other astounding and inspiring videos!)

2.  You can be part of an amazing transformation like this.  Become a foster home!  I can’t tell you what an amazing feeling it is to watch a dog like Chauncy or Chase blossom in front of your eyes, and knowing that without you, they would never have had the chance to live, let alone become a cherished part of someone’s family.  Fostering is addictive.  Once you’ve made that difference in an animal’s life, you’ll be hooked.  And that’s one healthy habit!  Find out for yourself: call your local shelter or rescue group (and fill out a volunteer profile on Adopt-a-Pet.com!) and ask about fostering.

OH!  Adorable Chauncy is available for adoption in the Southern California/Los Angeles area.  Please check out his information here!