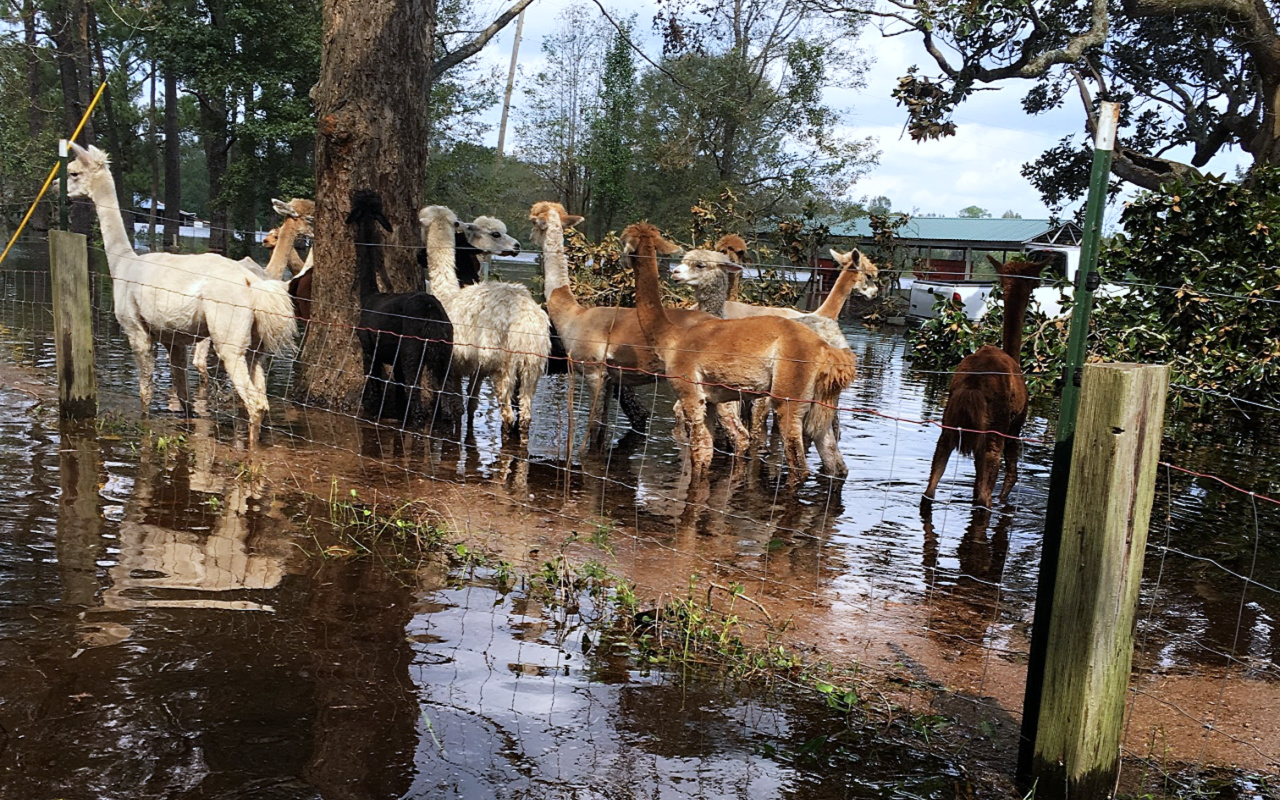 With the increase in the number of yearly natural disasters, rescue efforts for pets in affected areas has become a growing need. This year alone animal rescue volunteers have already had to deal with the aftermath of Michael, Florence, and a few other smaller tropical storms.

Providing relief during disasters like Florence and Michael often requires quick planning and making due with limited supplies. Animal rescuers like Keith Benning, from Turtle Mountain Animal Rescue in North Dakota, understand the amount of scrappiness needed during disaster relief from first hand experience. As a disaster volunteer Benning came to the rescue for a number of dogs in the wake of Hurricane Florence, which left massive flooding across North Carolina. Benning shared several Facebook videos showing animals trapped on top of cars, tables and porches—as they watched water levels rise toward them.

“I know. Looks like you’ve seen better days,” Benning said in one of his videos, as he approached a dog sitting on top of a car. Only the top part of the vehicle was sticking out of the water at that point.

In another video, Benning sits with two dogs seeking refuge from the high waters on top of a wooden table.

“These two were the ones that weren’t letting anybody on the porch,” he said, “but we’re slowly making friends.”

Benning started Turtle Mountain Animal Rescue out of his garage back in 2013. Now, nearly 4,000 rescued animals later, he’s using his expertise to rescue animals in the aftermath of major hurricanes.

“We literally pack up and drive across the country to rescue the animals no one else can get to,” Benning said on the group’s GoFundMe page. “We’ve been able to save dozens of horses, dogs, cats, goats, chickens, cows and even alpacas that would have drown or died standing in water, and we’ve done it with a canoe, a paddle board, some heart and grit.”

Benning and the volunteers at TMAR know vulnerable animals could very well need their help again before the year ends and there will more that likely be another major disaster within the next 12 months. That’s why they want to be as prepared as possible for the next hurricane.

“[With Florence,] we had a canoe with a small motor and towed paddle boards with kennels on them, and used that where we could.” Benning said. “When it came to getting across the river we had to hire locals. That was great but created a lot of lag time waiting for them to be able to show, then working on their time table. If we can get a boat we can set up camp close to where we need to launch and stay in tents. If we could hit the water at sunrise next time and come off at sunset we could do a lot more good.”

The team at TMAR has taken to social media and GoFundMe to raise awareness on the difficulties surrounding disaster relief and to gather more supplies for the next time they are needed. Check out their GoFundMe page to learn more about the animals they’ve helped and find out how you can help them save more animals.

We’re just staring to hear from Keith. Cell service is sketchy but we’ll share with you what little we know. We believe he’s near the Cape Fear river which is set to crest tomorrow at 61.5 feet, which is 46 Feet higher than where it was two weeks ago. We don’t know all the circumstances of these rescues, please hold any criticisms of (people leaving their pets behind) it is likely there is more going on that just what you are seeing. Thank you. The team at TMAR couldn’t be prouder to be able to support Keith on this rescue mission. Consider donating $10 toward his trip, any additional funds that get donated that he doesn’t use will go to small shelters in areas of immediate need in North Carolina. Click the link in our description to donate. #hurricaneflorence#hurricane#dogrescue#animalrescue#northcarolina#TMAR#turtlemountain#rolettecounty#hurricaneflorence2018#dogs#floods#floodrescueteam#northdakota#turtlemountainanimalrescue#c.j.english#rescuematters

A post shared by TurtleMountainAnimalRescue (@turtlemountainanimalrescue) on Sep 18, 2018 at 5:57pm PDT