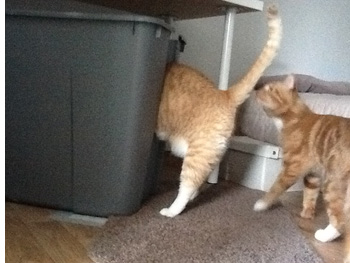 Are you looking for help with a cat that is peeing outside the box? This article may be your instant easy fix! Maybe it’s not verifiably The World’s Biggest Litterbox, but the enormous litter box that my vertical urinating foster cat inspired me to create is the biggest I’ve ever seen! (Yes, that’s a photo of the actual litter box and the actual foster cat, at right.) Most litter boxes are designed primarily with their human purchasers in mind, not so much the cats who use them. If a cat had to design their perfect litter box, I imagine it would look like a child’s sand box or a freshly turned-over vegetable garden! But since we’ve domesticated cats to be our pets, and desire to keep them safe from harm by keeping them indoors, most homes aren’t large enough to have an indoor sand box or garden just for our cat’s bathroom use. Enter the plastic “tupperware” type of litter box. Cats are quite adaptable, and their bathroom habits usually including a preference for digging and covering in a soft sand- or dirt-like substance. That makes them typically easy to litter box train, i.e. providing them with their preferred surface in a small-ish plastic box. Then, there are the rare cats like Simba. Due to past trauma or other undetermined behavioral sources, he’s a cat who was thinking outside the box, and not in a good way! He was with a rescue, but who would adopt a cat who peed outside the box? What could be done so he could find a home?

What could be done was to litter box rehab Simba! Going outside the box is one of the top five reasons cats are abandoned at animal shelters, but it is a problem that can often be fixed, and often quite easily too. Simba is a gorgeous big orange tabby tom cat, recently rescued from the streets, and then the shelter. Also, recently neutered. Fortunately, I have a fairly cat-pee-proof foster area – anything that can’t be waterproofed or washed in the machine can be replaced or repainted! I’ve been successful before with litter box-challenged cats. I attribute that to my low-stress setup, proliferation of litter box styles, locations, and OCD litter box cleaning habits. I  knew from my informal litter box testing that cats think bigger is better when it comes to litter boxes, and I had a few other steps to use to solve litter box problems that had worked like a charm in the past. The rescue felt I was Simba’s best chance, so I volunteered to foster Simba.

Simba had a full vet checkup and all his tests were negative. He’d been neutered a few weeks prior. He was ready for behavioral detective work! Simba made it super easy for me — on the second day, I watched him hop into one litterbox, turn around, and still standing up, shake his tail and pee right over the edge! A few more days and it was clear (with some black light verification) he was only “using” the litter box and not going elsewhere, but it simply wasn’t working for his style of use. Since I had no idea how I’d train a cat to squat, I decided to make a litter box that would work with him standing. I measured his rump height, and realized even my storage container taller-than-normal litter boxes were too short for Simba. Commercially available litter boxes don’t work for “elevator” urinators like Simba because:

I needed a bigger box… The World’s Biggest Litterbox! I had a 33-gallon plastic storage bin in my garage that was tall enough to contain even the spatter spread height, but I wasn’t confident he’d jump down into it. A quick online search revealed that a soldering gun could cut through the plastic like butter, leaving relatively smooth edges behind. And that’s just what I did. I used the hot tool to melt through the plastic, cutting a U-shaped opening out of one end. Just wide enough to allow him to easily hop in, but minimizing the open space that he might urinate out of. Since he liked to jump in and turn around, I thought that might do the trick… and it did!

Before you think “no way will I have a litter box that big in my house” — the footprint is about the same as two medium litter boxes side by side, which I’ve seen in a lot of people’s homes.

I immediately went and bought three more storage bins (only $12 each at Target), slightly different styles just to see if he had a preference. One I cut the U in the longer side, because of where I wanted to put it, and that has turned out to be his favorite one, right next to the door out to the catio. Litter box problem solved!

Happily a few weeks later Simba was adopted, along with one of The World’s Biggest Litter Boxes! 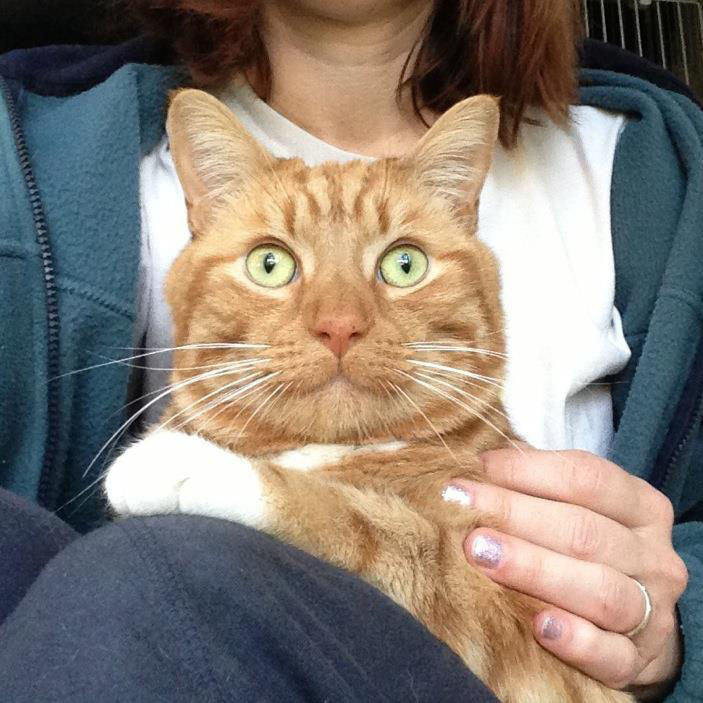