Best of Dog Tips < Do dogs like to be pat on the head? (With videos!)

Do dogs like to be pat on the head? (With videos!) 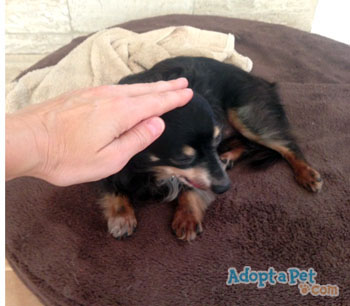 There’s just something so appealing about the smooth or shaggy top of a dog’s head. Cats too, but humans haven’t passed down the tradition of patting a strange cat on the head! The truth is, most dogs don’t like be patted – as in a tap tap tap motion with our hand – on the top of their head. Look at Gizmo in the photo, a classic closing of the eyes and moving his head away from being pat. So why do we humans continue this tradition? Well, dogs heads are often the closest part of the dog to our hand that isn’t a part that we obviously don’t want to pet, like say their nose or their eyes. Then there’s what we learned as children, since humans often show each other affection in this way. Think of a mother comforting her child, stroking their hair soothingly – essentially petting them on the head. Humans learn from other humans and that’s why we continue the dog pat on the head routine.

How can you tell if a dog or your dog likes to be pat on the head? If you really watch a dog’s body language as you pet him, you can often see subtle (to the untrained human eye) signs of nervousness or discomfort. For example, watch the video of me petting my anxious dog Max. He does love to be pet and massaged on his body usually, but near his face/head makes him nervous:

You can see him licking his lips which is a nervous sign, and then he’s a little conflicted, he wants to be a good dog so at the end he puts his head down, but he’s actually turning away and looking away as he does it, as he really doesn’t want to be pet.

A real easy way to “read” if a dog you don’t know likes being pat on the head or pet anywhere else: Try a pat or two, then stop and see if the dog asks you for more!  Here’s a video of Gizmo doing that, asking for more petting by walking/leaning into me each time I stop:

While dogs don’t show each other affection using their paws on each other, many dogs certainly enjoy having humans pet them. Neck rubs, base of tail scratches, back massages, even belly rubs are asked for and enjoyed with boundless enthusiasm by many dogs!There are so many great places to pet a dog that he or she will enjoy. Just remember to restrain yourself from that pat on the head.