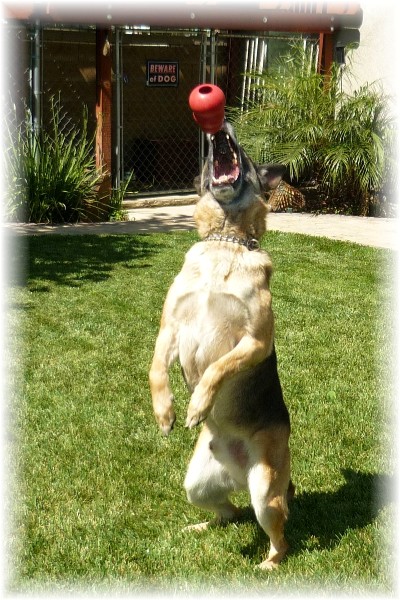 This is a story about how one dog went from a Death Row at an Animal Shelter to having his own scrapbook of heroic achievements. German Shepherd Rescue of Orange County (GSROC) learned of a male 1 year old German Shepherd at the Devore Animal Shelter in November 2006. Jambalaya, who quickly became known as Jambie, came into that shelter listed as a stray. He lay there, a very depressed and forlorn Shepherd languishing in on the shelter floor. Shepherds are extremely sensitive and intuitive, and they know when their families have cast them off. There was no doubt that this dog had lost hope of being rescued. But GSROC came to his rescue and proved him wrong! He was worth saving and they were committed to making him a happier dog.

Jambie was small GSD with good markings and a rumpled coat. Once out of the shelter, personality wise he was like a highly alert teenager who had never been given any boundaries or direction. He was a handful but in a cute “Dennis the Menace” kind of way. GSROC enrolled him in a basic obedience class, but his handler had to stand at the back of the class with him because he was frequently misbehaving. Much later on, they figured out that Jambie has just been plain BORED with the basics!

Because there are never enough foster homes, Jambie had to go into boarding at a kennel that they use regularly. Fortunately, GSROC has a great team of dog walkers who exercise their dogs regularly, helping keep their spirits up and teaching them some basic leash manners. Jambie hated confinement in the boarding kennel but he loved time with the volunteers. He would do anything for a tennis ball – even if that anything meant leaping onto the conveyor belt while a cashier rung up a tennis ball gift from a nice volunteer during a PetSmart outing. People clapped and whistled with glee watching Jambie in action on that thing! Little did they know then that it would be this obsession with toys that would be his ticket to the big time.

It was almost as if Jambie knew he had been saved by GSROC. His spirit soared. He began to prance energetically when he walked. He was relentless and uber focused. He was silly and boisterous. Based on his enthusiasm and agility, German Shepherd Rescue of Orange County rescuers felt that Jambie had tremendous potential that was worth developing. One of GSROC’s favorite training facilities, Sirius K9 located in Yorba Linda, had put out a ‘casting call’ looking for candidates for working dog opportunities. It’s important that in order to be a working dog, rescued dogs must pass both the aptitude tests and a rigorous physical screening in order to make the grade. So they took Jambie to “audition” at Master K9, a facility known for developing top quality Search and Rescue and Detection dogs. Jambie would have to undergo an evaluation, then two weeks of intensive training to see if he was cut out for a “job”. It was here that Jambie tackled the exercises with ease and grace and his knew life as a hero was about to begin.

At the test for working dog candidates, every rescue group was there with high hopes that hey had a dog with that special something needed to be a working dog. When the test started, Jambie’s alert and professional side emerged. He transitioned from a goofy, naughty, distracted pup to the regal Shepherd with a job to do. Jambie passed every test with flying colors….he calmly retrieved every thing that was tossed out or hidden for him, proudly trotting back to the trainer with each new prize. After that, the secret was out – Jambie’s potential seemed endless.

At the very same time the Orange County Sheriffs were looking for a dog for a pilot program, a unit that would be dedicated exclusively to drug detention, particularly drugs coming up through the southern county from Mexico. The dog had to be the best available to handle the drug smugglers that had been virtually unchecked by standard police measures.

Looking at the all dogs available, the prospective handler, Dennis, an OC Sherriff Deputy, kept looking at Jambie who excelled in all venues and who also happened to remind him of his childhood companion, Copper. Jambie was then and there chosen by Dennis to be his partner, and Dennis changed his name to Copper, in honor of his first GSD. GSROC felt like they had a child who got into an Ivy League college! Here was their little shelter rescue dog learning beside pedigreed dogs imported from Germany especially for their skills! The now Copper went to live with Dennis and his family in his Riverside home and service life was about to begin.

The dynamic duo trained to work as a unit in the OC Sherriff’s Department. Copper’s specialty was finding guns, money and drugs; he and Dennis were frequently called in to search homes, businesses and vehicles. He had graduated as a certified K9 excelling every step of the way. Copper was certified in five scents, his nose considered an expert witness in court and “reasonable cause” in the event a warrant was required. But best of all, Copper also had a home with Dennis where he hung out with the family’s toddlers and was loved family life .

Here is some information about two of their search and rescue missions:

In October 2007, only weeks after being in service full time in a black and white, Copper and I assisted another unit on a stop. The handling Deputy conducted a search prior to our arrival and located 1 kilo of cocaine on the rear floor board of the vehicle. I ran Copper around and eventually inside the vehicle and he alerted on the rear floorboard, near where the earlier mentioned kilo was found. Suspecting that he was alerting on the residual odor from the kilo, I aired out the vehicle and ran him again. Copper gave another strong alert in the same place. I began a more intrusive search and found an electronically controlled hidden compartment underneath the center console. In the compartment, we located an additional sixteen (16) kilos of cocaine.

In March 2008, Copper and I were working the Orange County/San Diego County border when we received a call from a regional team. They were calling from the City of Industry and requested a search of a car that they had stopped. Investigators had searched the car for a little over an hour but were not satisfied with the outcome. Copper and I responded as quickly as the law allowed and moments after our arrival, Copper alerted on the passenger rear quarter-panel of a high end European passenger vehicle. I checked a database for known concealments on vehicles of this type and there was only one, the rear quarter-panel. A subsequent search revealed $175,000.00 in U.S. Currency. The investigative team made it clear that without our response, the money would have been lost, so needless to say, I was very proud of Copper.”

Copper has saved our community from drugs, violence, and other illegal activities. During his years as a detection dog, Copper had the highest drug bust rating of any So Cal K9, and was the only OC Sherriff K9 to work specifically on drug trafficking.

Copper is still an adventurous dog that amazes his family with antics – but he’s also an OC cop! Dennis and Copper as a team had an impressive record while they worked together. Copper holds the honor of being the first, and to GSROC’s knowledge, the only Southern California rescued German Shepherd to make it into law enforcement. Copper just recently retired and remains with his handler and family. While he still enjoys a rousing game of ball, he can appreciate lying in the sunlit grass almost as much. His hard-earned love and security are here to stay. The moral here is that Jambie wasn’t a bad dog at all—he was a working dog whose talents had yet to be discovered. Once he was in the right hands, he blossomed into HERO dog that he was meant to be.

German Shepherd Rescue of Orange County is a 501c3 all volunteer organization. They were founded in 2005 and boast over 250 volunteers. On average, they place approximately 350 shepherds into loving homes each year. They have no paid staff and receive no government funding. All of their resources come from donations and kind people.