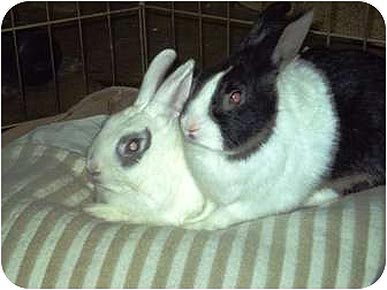 Adopt-a-Pet.com’s partnership PEOPLEPets.com is raising awareness of animals adoption! Each month, PEOPLEPets.com highlights a pet from AdoptaPet.com who is looking for a home. This month, it’s Cosmo and Newman, two bunnies who were abandoned at a California pet store and living in an uncomfortable fish aquarium when volunteer Christy Schilling first laid eyes on them. “They couldn’t even hop, the tanks were so small and there were bright lights on them,” Schilling remembers.

The animal lover rescued the duo (Cosmo is white with black and brown markings, Newman has gray and black touches) and has been trying to find them a permanent home since the end of February. “They’ve been inseparable ever since,” she says. “They’re complete buddies.”

They really love spending time together (“They clean each other!” Schilling says) and would thrive with a little outdoor space. “They’re very sweet and you can pet them and hold them. They’re good with kids,” she says.

Cosmo and Newman weigh 2 lbs. each, are both about a year old and won’t get much bigger. Both boys are neutered and litter-box trained. “I just put the litter box in their cage,” says Schilling, “and they went in it.”

If you could see Cosmo and Newman bouncing around your home, check out their profile at http://www.adoptapet.com/pet5388278.html and email the Los Angeles Rabbit Foundation at losangelesrabbits@earthlink.net