The Top 7 Breeds for the Active Dog Owner 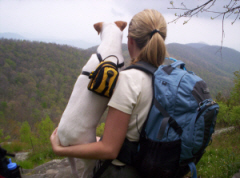 Run! Swim! Hike! Hunt! Seven Breeds for the Active Dog Owner – a guest post by John Durfee. Like most young boys, I always wanted a dog of my own. As an adult, I still wanted to have a furry best friend by my side. I recently moved into a larger home and I finally had the open space and backyard to have a dog. But I also lead a very active lifestyle; I exercise at least 4 times a week and weekends are usually outdoor excursions in the high desert hiking, running, or camping. I wanted to have a companion that could keep up with me and would also enjoy the constant activity as much as I do! After doing my research, I came across seven breeds that would be ideal for an active individual like me.

These grand and majestic animals are also known as sled dogs. Having been bred to pull Inuits across vast distances, this is your ultimate long distance breed. If you do plan on running with a Husky, it’s best to do so in moderate to cold climates as their thick coats can easily lead to overheating. They’re gentle but very curious creatures so you should always keep them leashed as you may end up having to chase them down for a long period if they see something that catches their attention!

Not nearly as popular as other breeds, this is an old English Hunting dog. Aristocracy used to hunt with them in packs as they were known for running many a mile on the chase of a scent. They have a great sense of smell and are very friendly and active in demeanor. You wouldn’t have any issue running in open and populated areas with this breed as they’re bred to focus and won’t spook easily.

Originating from Hungary, Viszla are beautiful animals. They have sleek rust colored coats and the build of a greyhound. They are originally pointing and retrieving dogs, but they have great endurance and energy for any running/hiking activities. They are very protective (their nickname is “velcro dog”) so you won’t need to worry about them running off if you’re on a trail or in a park. This is one of the few breeds of mid size dog that is not prone to Hip Dysplasia, a form of joint arthritis. They have a lifespan of 12-14 years.

The Boykin Spaniel is a friendly, social dog that does best in a family environment with lots of outdoor activity. They were originally trained to be water hunting dogs, so they are equally adept at being at the beach as they are on dry land. They have curly coats that grow to medium length and are a dark brown/chocolate color. Because of their coats, they’re best suited to colder climates. Regular coat maintenance is a must as their fur can easily tangle and catch a lot of natural debris.

Carved into our collective consciousness as guard dogs or police dogs, Dobermans make a great choice for women. Because of their aggressive appearance and stance, with a Doberman, you’ll feel more secure about running at night. Dobermans are intelligent and highly protective, so you’ll need to train them young. Once they are properly trained you’ll have no issue taking them outdoors and in public.

If you do a lot of activity on the waterside such as swimming or surfing, you can’t get much better than a Newfoundland. Newfoundlands are long coated water dogs who love being in and around water. They’re very large dogs and can be anywhere between 100 to 150 pounds with white and black coats. They were bred for pulling in fishing nets and other heavy equipment. They’re a gentle breed and have been known to rescue people from drowning. They are known for their endurance and can be in the water with you all day long. They will probably want to stay even when you’re surfed out!

This is another breed well suited to the aquatic environment. Visually, they have the build of a golden retriever with the color of a Dalmatian – black and white spots. They’re high energy and great for moderate to cold environments. They don’t have quite the running endurance as compared to Viszla or Rhodesian Ridgebacks, but a great all around breed if you split your time between beach and trail.

Often the best companions are adopted from local shelters. Not only will you be giving a loving animal a much needed home, but most mixed breeds also have lower instances of health problems like hip dysplasia. And they allow you to enjoy the benefits of several breeds! Lab mixes are known for their energy and can make excellent running companions for even top notch athletes!

With all dog breeds you should be aware of their foot pads and on what surface you run on. If you plan on doing runs of 5k a few times a week, try to stay on grassy areas because even smooth surfaces such as asphalt will wear down their pads quickly. Or, you can purchase running “shoes” for dogs. They may look funny but they will save your dogs’ pads in the long run. Always make sure your dog drinks lots of water beforehand and keep an eye out for overheating, as they will often run past the point of safety. Also, only run with adult dogs whose joints have fully formed.

John Durfee is a Gulf War veteran and the marketing manager for Airsplat, the nation’s largest retailer of Airsoft Guns and Airsoft Apparel.

Best of Adopting a Dog |