Best of Cat Tips < What does meow mean?

What does meow mean? 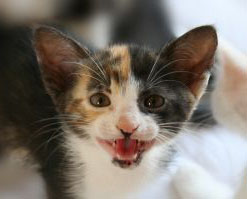 Meow? Mrrrrrrow? Mrow? Meeeeeeoew? Do you speak cat? Do you sometimes with you did? Did you know that cats meow to people, but very rarely to other cats? Adult cats, living apart from humans, have very clear communication with one another. Cat language is spoken mostly through scent, then through facial expression, complex body language, and touch. Cat sounds for vocal communication involve caterwauls for mating, chattering upon spotting prey, hissing to ward off an intruder, or shrieking when hurt or terrified. Meowing is not part of natural cat language. Meow-ese, it would seem, is a language developed exclusively for humans, outside of a mom cat taking to her kittens. Our friends at Petcentric have delved into all the reasons cats meow to communicate, and we’re happy to share it with you right here!

The only meowing in cat language is done between mom cat and her young kittens. A kitten’s tiny “mew” is a cute, endearing sound, used to solicit attention and care from mom cat. Once the kittens are grown the mews and meows stop.

So why do cats meow to people? Because meowing is what works. Your cat is dependent on you, and quickly learns that you are clearly not picking up the scent messages she leaves on your things, and you are not completely fluent in cat body language.

The disarming “meow” or adorable “mew,” is what gets you to do what she wants. So the meowing develops into a second language to communicate to you. Some scientists would go so far as to say that cats have refined their meows specifically to manipulate people. We have to admit it works.

There are dozens of meow sounds in cat language that vary in pitch, length and volume. Most cat owners learn the language easily. A short, high-pitched meow is a standard “Hello!” Several of those strung together mean “You’re home! Yea!!!”

Cats use pleasant meow sounds to solicit requests for food, to go outside or to simply get attention. Your cat learns which meow is going to get the results he wants. You may find that the meows that tug at your heartstrings the most are the ones your cat is using for pleas such as, “pet me.”

Cats use unpleasant, harsher, louder meows for demands, reprimands or to express annoyance. These meows have a lower pitch and are not all that cute. Cats know not to use ugly meows to seek a favor–because you’re unlikely to comply with such rudeness.

Meow-ese seems to be generally understood by “cat people.” Dr. Nicholas Nicastro, Ph.D., who did his thesis on humans’ ability to understand meows, found that people who own cats were far better at understanding the meaning of meows than people that don’t. Dr. Nicastro recorded hundreds of meows cats used in real settings with their owners. He had people listen to the meows, then asked what they thought the cats were communicating.

Part of the experiment asked general interpretations (Does the cat sound angry or pleasant?) and part were more specific translations (Is this cat asking for food or does he want you to go away?).

Not surprising, the more experience the people had with cats, the better they were at understanding meows – those who had no cat experience scored very low. People who owned cats could correctly translate 40% of the meows. That’s pretty remarkable considering the respondents did not have the benefit of seeing the cat. Normally, when a cat meows, we get more clues to its meaning from the context in which the cat is speaking (by the door, near a dirty litter box, time of day, etc.) and from body language.

It’s kind of nice to think your kitty has gone to the effort to learn a second language to communicate with you. Sure, she did it mostly out of necessity, but also out of affection. She wouldn’t meow just for your attention if she didn’t enjoy a relationship with you.

The Meaning Behind the Meows and Mews

Your cat uses the basic meow or mew in several variations in many situations. Even though there is a distinct “demand meow” for example, your cat may have separate variations for each of his regular demands. If you watch what your cat is doing when he meows, and listen carefully, you may learn to distinguish the demand meows, and eventually know the difference between his “let me out” demand and his “give me food” demand by sound alone.

More stories about communicating with your cat from our friends at Petcentric:

Talking to Your Pets