Take one fabulous powerhouse baseball couple with a major-league love of companion animals, add in the support of their team and stadium, mix in several adorable, adoptable dogs and a couple of awesome animal rescue groups, and what do you get?  Sox For Strays, an incredibly innovative event I had the pleasure of attending last week. 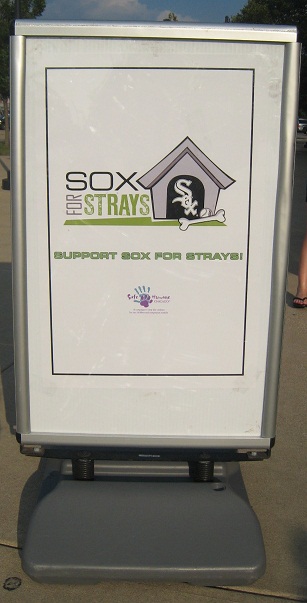 Sox For Strays is an adoption-promoting program founded by Jamie and Mark Buehrle, of White Sox fame.  If you’re a baseball fan (or if you’re even remotely aware of the game), you know Mark Buehrle by his impressive accomplishments.  Last season, he became only the 18th major-leaguer since 1900 to pitch a perfect game (July 23rd at home against Tampa Bay…yeah, I’m a baseball nerd).  He’s one of just a few players in Major League history to have thrown both a no-hitter and a perfect game.  He’s an All-Star, a Gold Glover…I should stop myself, but believe me, I could go on.

Believe me when I say Jamie Buehrle is every bit as cool as her husband, and she is a force to be reckoned with.  Luckily for us, she uses her powers for good.  Every month, Jamie and Mark invite an animal shelter or rescue group to bring a few adoptable pets to a special pre-game adoption event at U.S. Cellular Field, home of the Chicago White Sox.  Jamie records a special public service announcement featuring the pets, which is played on the stadium’s huge video screen during the game.

The July event was very special because it featured Hope Animal Rescues.  Although Mark and Jamie Buehrle support several animal shelters and rescues, they are particularly connected with Hope Animal Rescues, even donating a new facility that will be called Buehrle’s Barn in their honor.  Jamie had told me how amazing she thought Hope Animal Rescues was, and when I met Jackie Spiker, Hope’s co-founder, I could see why.  Jackie is an energetic, compassionate, tireless advocate for animal welfare.  Whenever Hope has room to take in a few more dogs, Jackie and her partner Kim Lee go to animal control and take the dogs that are on their last day.  It doesn’t matter what they look like, how old they are, if they have medical issues, or anything else: if they’re out of time, they end up in the car with Jackie and Kim.

Jackie told me about a very special puppy named Soldier who currently needs a foster home in the Madison County, Illinois area.  Soldier is a 4-month-old lab/basset hound mix with a deformed front paw that will need to be removed.  Although Soldier’s veterinary costs will be covered, he is currently being boarded and desperately  needs a loving foster home where he can recuperate.  After that, he will be available for adoption.  If you can help, please go here and apply to be a foster home.

The dog who most captured my heart at the Sox For Strays event was a really special guy named Truman.  I’m not alone, either.  When Jamie and Mark Buehrle heard about Truman, they really stepped up to the plate, so to speak, and took financial and emotional responsibility for his care.  Truman has an amazing story: he was found on the street, guarding the body his friend, a dachshund who had been killed by a car.  He was terrified, and it took Jackie and Kim of Hope Animal Rescues three days to catch him and take him into their care.  You can read all about Truman’s story here.  Warning: have some tissues handy.  Since this story was written, Truman has made so much progress.  He’s in a foster home, he’s working with a trainer and doing agility, and he’s ready for the right forever home.  Truman will need a very patient, calm, and kind family to love him.  I think you’ll agree that Truman is a study in loyalty, and I was honored to be able to spend some time cuddling with this amazing being.  I can’t get his beautiful face out of my mind.

If you’re in the Chicago area, don’t miss the next Sox For Strays events, which will be at U.S. Cellular Field on August 11 and September 17.  If you bring a donation to the featured animal welfare group, you’ll be entered to win a signed item from Mark Buehrle himself!

Below are some pictures of the day, including a couple of Truman: 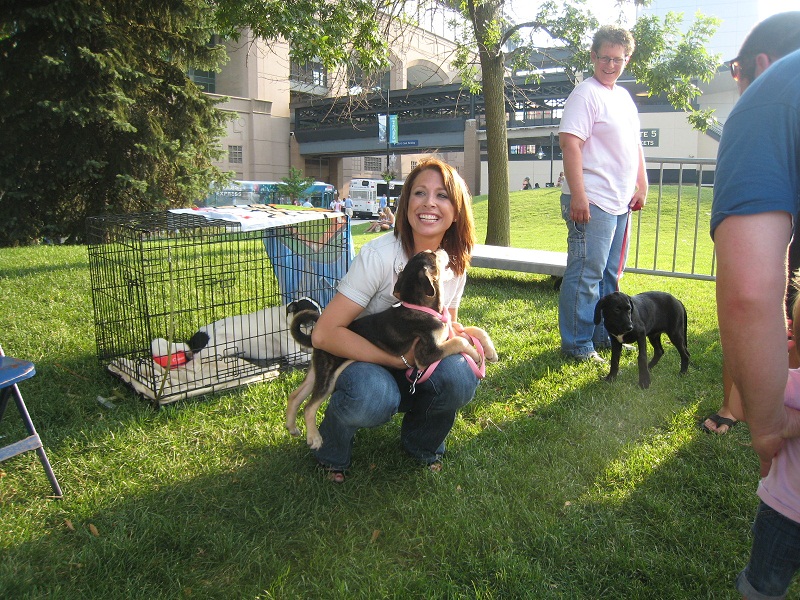 Jamie Buehrle, the co-mastermind (along with Sox pitcher Mark Buehrle) behind Sox For Strays 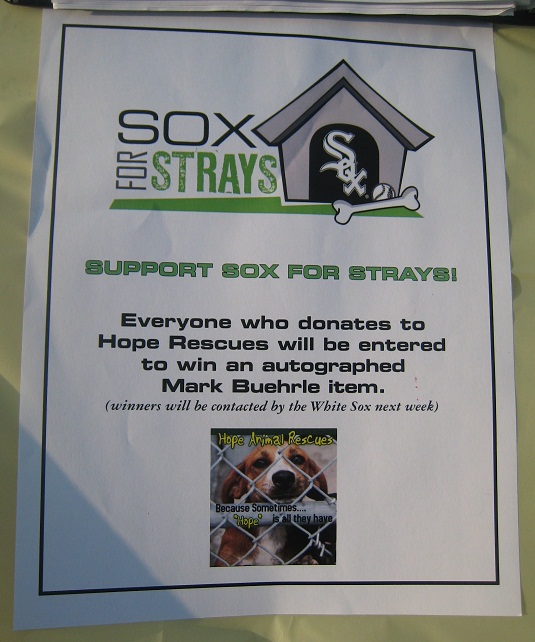 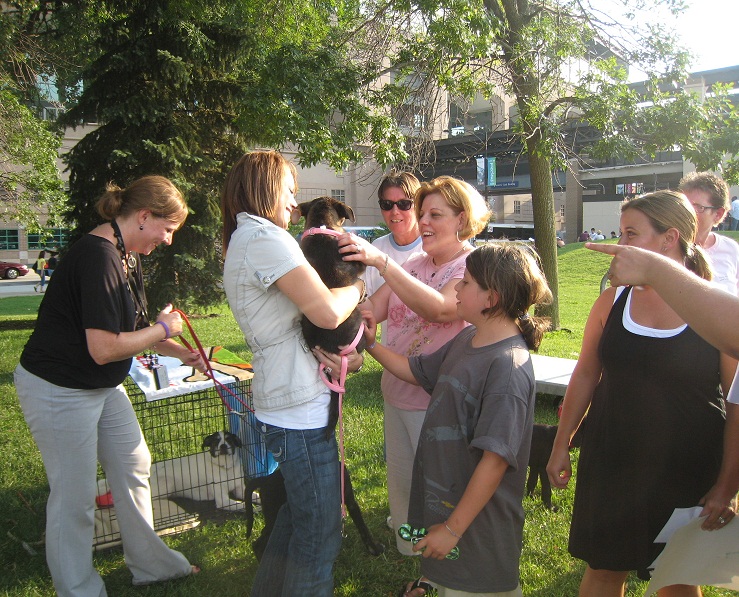 Jamie Buehrle hands over a puppy to his new family. A beautiful, exciting moment! 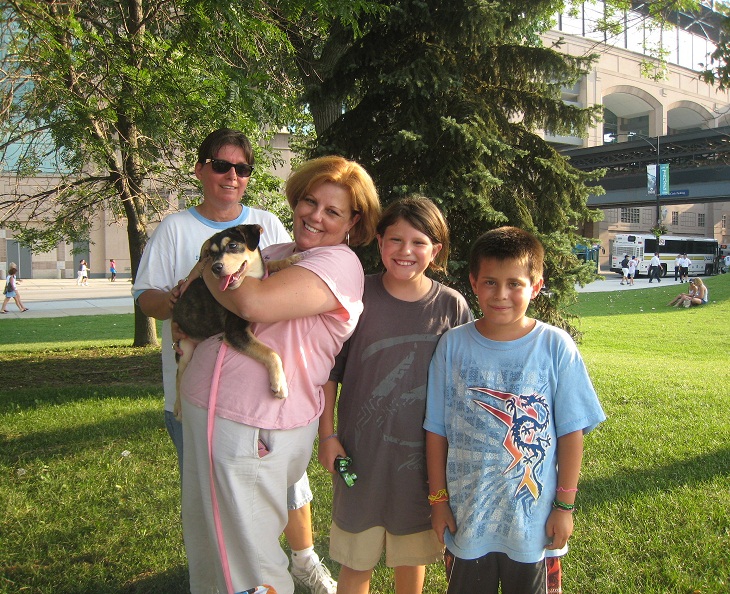 Jackie Spiker, Co-Founder of Hope Animal Rescues, makes yet another successful match! This family drove a long distance to pick up their new family member. 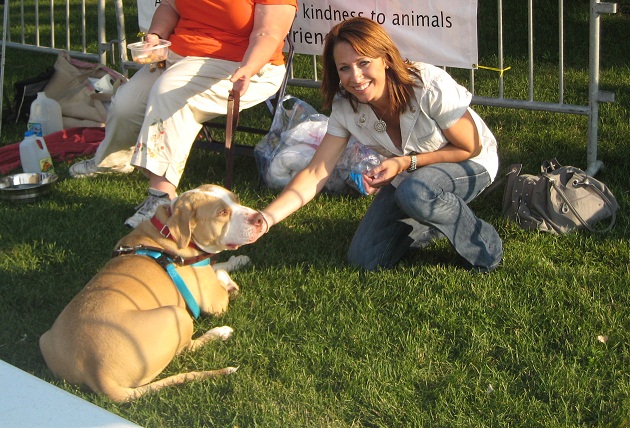 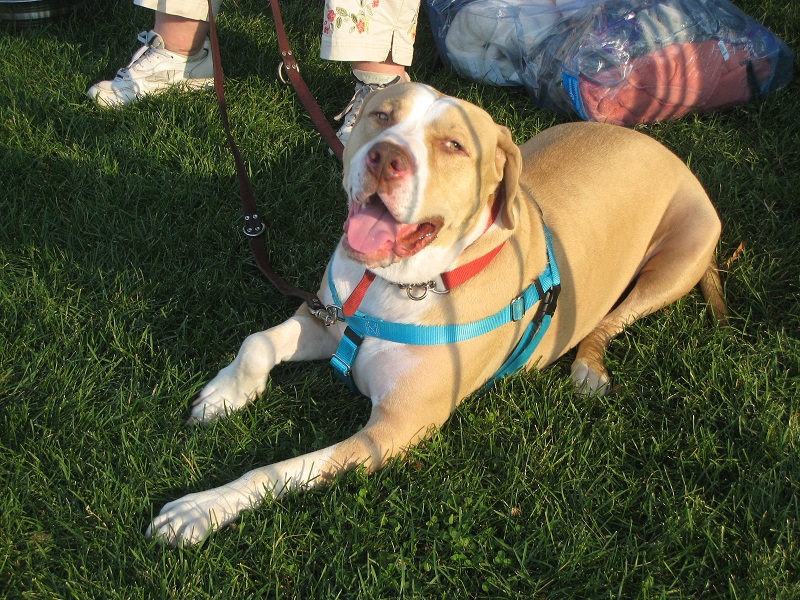 Truman, the dog who was found on the street, guarding the body of a little dachshund who had been killed by a car. Truman needs a very loving, peaceful home...yours, perhaps? 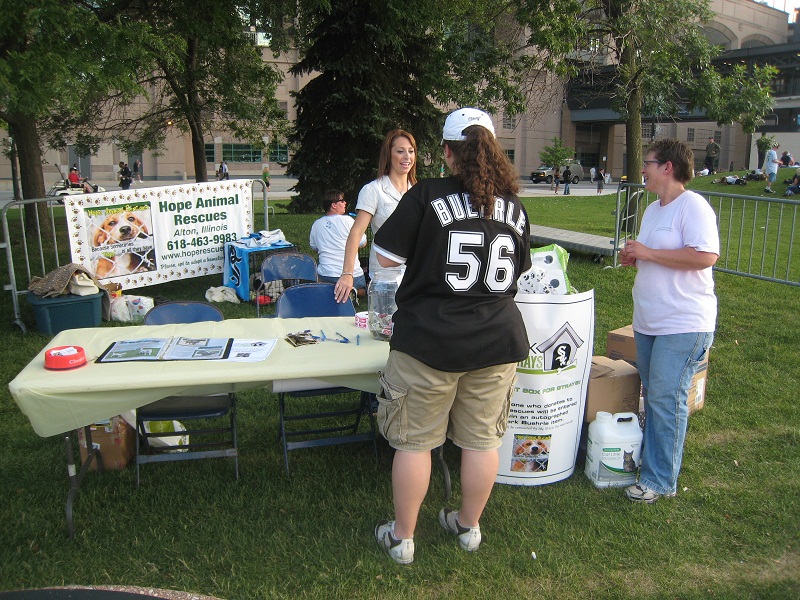 Fans who donated cash or pet-care items were entered to win an autographed Mark Buehrle item. Some were surprised to find out they were talking to Jamie Buehrle herself! 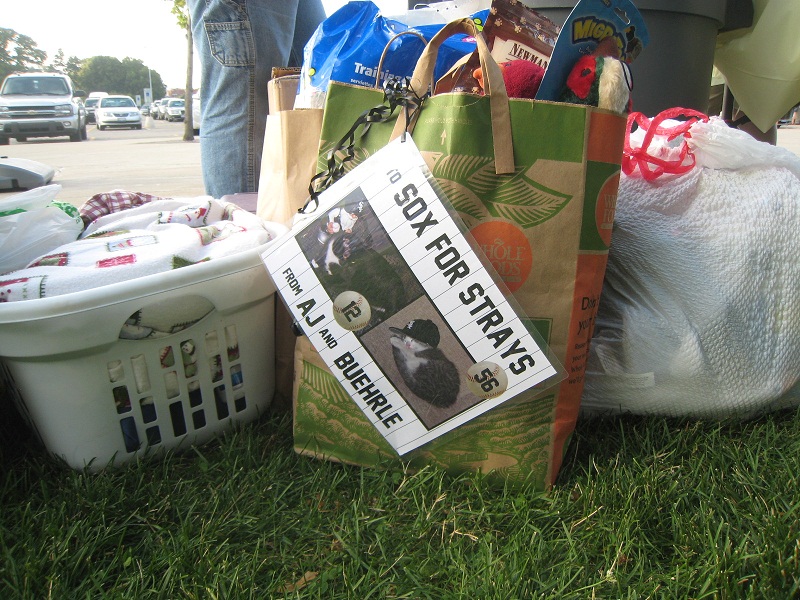 So many fans brought items from Hope Rescue's wish list. The bags and boxes piled up.