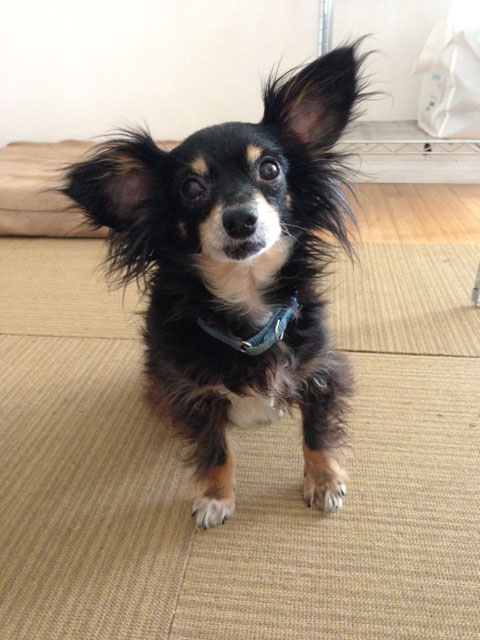 I’ve been fostering dogs and cats for 15 years, and Gizmo is my first “foster awesome” dog! Foster awesome is a rebranding of the commonly used phrase “foster failure” – when a foster volunteer adopts the pet they are fostering. Eight months ago I wasn’t intending on adopting another dog, much less fostering one. That day I went to the shelter to pick up two new foster cats that I’d seen on Adopt-a-Pet.com. One of the shelter staff, who knows me well, saw me walk in and asked, “Any ideas of a rescue who could help save a little senior dog who’s time is up? His name is Gizmo.” His shelter intake photo was a tiny black blob. Thinking I’d take some photos and a video for the shelter to add to his Adopt-a-Pet.com listing so adopters could get a better look at him, I went back to meet the little old man. He looked more like a skinny mini opossum than a Long Haired Chihuahua!  His black fur was missing all along his back and tail, and he was so shy, the staff told me he mostly just sat in the darkest corner of his kennel. No wonder he wasn’t getting noticed in a shelter crowded with other small dogs! As we stood talking, Gizmo did an army crawl out from behind the desk and tried to hide behind my boot. I found myself saying, “Let me see what I can do.” What I could do was ask a local rescue if I could foster him, and fortunately they could say yes!

Gizmo had been brought to the shelter by his elderly person who could no longer care for him. He was malnourished and severely underweight, in part due to how badly they’d let his teeth go, which had made it painful for him to eat. He had most of his teeth extracted, so his tongue often pokes out, adding to his lopsided-ears and gray-muzzle adorableness. We thought his hair loss, inflamed skin and itching were due to simple untreated flea allergies… but after a weeks excellent regular vet care, flea prevention, and nutrition, when the little guy started breaking out in itchy welts that looked like hives, the rescue’s vet recommended we see a specialist.

I’ve fostered dozens of dogs from the shelter, and this was the first time I took one in that needed more vet care than I’d expected. Fortunately, the rescue’s founder knew of a wonderful dog dermatologist. After many tests, the dermatologist diagnosed that Gizmo’s untreated allergies and poor care had trashed his immune system and thyroid – well, he didn’t say exactly that, but that’s my layperson’s translation of his medical findings! It took several months of food and treatment trials, but we finally figured out what diet, medications, and bathing schedule brings the poor little guy some relief.

After eight months of nursing Gizmo back to health, and watching his transformation, I couldn’t bear the thought of letting him go. Gizmo still has some paw itching that require topical treatment and twice weekly rinses, and he’ll be on thyroid pills the rest of his life, but now his lush coat shines and he’s a super happy and quirky little guy!  He’s won over my big grumpy dog, my bossy cats, my husband, and when no one is looking, I’ve even caught him racing around in joyful circles, barking at a toy!

Thanks Adopt-a-Pet.com for leading me (if indirectly!) to Gizmo, and his forever home.