How to give a pet as a gift 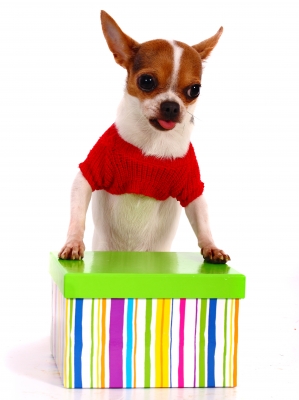 Giving a pet as a gift… this time of year, this is a hot controversial topic among rescues and animal welfare advocates! “Don’t give pets as gifts!” is so often the holiday refrain! Shelters and rescues will often deny adopters who reveal they are adopting the pet to give as a gift. But is this just one more holiday myth that should be busted, like black cats being in danger if they are adopted out before Halloween? We recently discovered a comprehensive study (published by the respected National Council on Pet Population Study & Policy, see quote below*) that showed that pets adopted from shelters and given as gifts were actually returned LESS often than regular adoptions! We don’t know if the guilt factor means the pet wasn’t returned, but may have been banished to a backyard or ignored, but perhaps there is something to the idea that an adopted pet carefully given as a gift – in the right circumstances – is a wonderful thing!

Give the gift of an adopted pet – but not the actual pet!

In those studies, “gift” is listed as a reason that owners do sometimes relinquish a pet to the shelter. It may rank in the #9 category out of #10. So how can someone give a pet as a gift, and have it be a wonderful thing for both the receiver of the present, and the pet being gifted? We highly recommend the gift not be a surprise. Why do people think that gifts given as surprises are any better than those that are anticipated and then received? They don’t have to be! If you want to  give the “gift” of the pet adoption wrapped up in a pretty box, then how about a photo of the potential pet in a frame, a collar, leash and ID tag, or a stuffed animal wrapped up? Or take the recipient on a “surprise” trip telling them their gift is at the destination – your local animal shelter!

Giving the gift of the adoption in this way has so many advantages. It allows the recipient to participate in picking out a pet that is he best match for them! The gift becomes not just a moment, but a shared process of going to the shelter to meet the potential adoptees – and also lets you give the gift of a pet adoption even if you don’t live nearby.

This way also allows a recipient to kindly decline if the pet you had in mind or the time is just not right, without the tragedy of a pet being returned to a shelter. Why is it bad to return a pet, when they were already in the shelter in the first place? It is very stressful on a pet to go from a shelter, to a home, back to a shelter. Pets that are adopted begin bonding immediately to their new person. When returned they are more likely to have trust and adjustment issues if they adopted again, and sometimes the stress shows itself in behavior or health issues too.

This is how we see pets as wonderful gifts, a gift of friendship and companionship, to be cherished and loved for the rest of their lives.

* Reference note from above: Highlights of five scientific papers based on the findings of the Shelter Relinquishment Survey and the Household Survey showed: “Contrary to what many shelter workers would expect, these data showed that dogs received as gifts were much less likely to be relinquished to an animal shelter than those who were acquired directly from an animal shelter, a friend, a pet shop, or as a stray. Dogs whose owners paid $100 or more for them were less likely to be relinquished. “