How to trim your cat’s nails 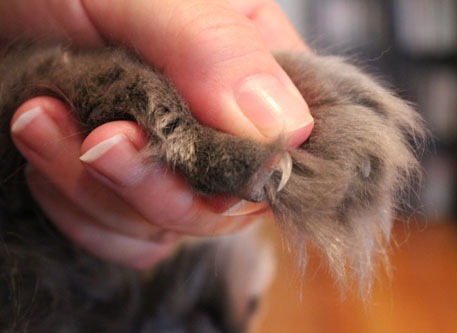 Ideally, cat nail clipping is something you start at very young age, always trying to make it as pleasant an experience as possible – often just doing a nail or two at a time. This gets them used to the sensation, and then as they grow up, they continue not to mind having their nails trimmed. If you’ve adopted an adult cat, and/or if you have never clipped your cat’s claws, you may want to practice holding your cats paws, and extending their nails, before you try using cat clippers. Have your cat lie on your lap as if you were going to clip their claws but instead gently touch their paws. Repeat that over several days. Then try lightly pressing on the bottom of their paw, pushing out the claws while hold the cats paw in your hand. Use one finger on one side of your cat’s toe, and the other on the bottom (on the toe pad), gently squeeze on the toe (or toes) until the claws extend. See photo. 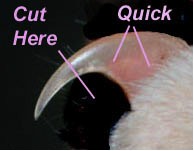 When you can accomplish paw holding and nails extension with a relaxed cat, use a pair of sharp nail trimmers and cut off only the tip of the nail. Take care not to damage the vein or quick, which is very painful if cut. See photo for where the quick is located. It is pink and visible on clear or light colored nails. On dark nails, you have to estimate where it will be based on the curve of the cat’s nail. Better to take off too little, than too much!

If you have never trimmed a cat’s nails before, ask a vet or experienced cat person to show you how the first time. The nail “hook” is what tears up upholstery, so when it is removed, damage is greatly reduced.

Many cat owners find that using human nail clippers is easier than the ones designed for cats. You may want to try both to see which works best for you!

For cats that won’t sit still, some cat owners  find trimming just a few nails a day can do that trick – even just one a day while they are sleeping (or sleepy) will eventually get them all done!

Regular nail trimming as often as every other week will cause the quick to recede, and you can then trim the nails even shorter, for less scratching damage. If you have a cat that goes outside, do not trim their back nails, and consider no or minimal trimming of their front nails, to allow them the maximum chance of success should they need them to escape by climbing a tree, or fighting off an attacker.